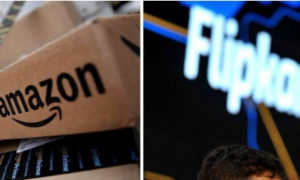 BENGALURU: Amazon India and Flipkart are on a similar run rate of $11.2 billion in gross merchandise value for fiscal 2019, Barclays said, issuing a clarification stating that an earlier report didn’t intend to mean that Amazon was “beating” Flipkart.

The investment bank said in a report last week that Amazon had overtaken Flipkart with a GMV of $7.5 billion compared with the latter’s $6.2 billion on a standalone basis in the financial year ended March 31, 2018. It also said that Amazon was growing faster at 82%, compared with Flipkart’s rate of 47%. In its clarification on Monday, Barclays said several media reports had come to an “erroneous conclusion that Amazon India is ‘beating’ Flipkart”.

However, the original report had stated explicitly that while Amazon and Flipkart were neck and neck on GMV in FY17, “Amazon took the clear lead in FY18”.

Barclays said Flipkart’s GMV of $6.2 billion as it estimated for FY18 excluded the contribution from Myntra and Jabong. The total GMV, including these units, was similar to that of Amazon India, it added.

The earlier report also mentioned that Amazon was growing faster than Flipkart. The investment bank now said Amazon and Flipkart Group were neck and neck at an $11.2-billion GMV run rate for FY19.

It added that Flipkart (excluding Myntra and Jabong) would grow at about 45% year-on-year, similar to its growth rate over the past three years, while Myntra and Jabong would generate $2 billion in GMV, expanding at 65-70%.

“These are very impressive GMVs in a country where we are only in very early innings. Equally important — Myntra and Jabong are very high margin — so the exclusion of the business distorts the lagging data on profit/ losses of the Flipkart entity. Unfortunately, since Myntra and Jabong have not filed financials, we were not able to include the entity’s positive contribution to profitability,” Barclays said.

A Flipkart spokesperson said as a group, it was almost double that of the nearest competitor. “Our work over the years, and specially in the last two years, suggests that Flipkart is way ahead both in terms of revenue and market share and has showcased that progress in our marquee events, including the Big Billion Days, every year,” the spokesperson added.

Amazon said it would not comment on industry reports and reiterated that it was the most-visited marketplace in the country.