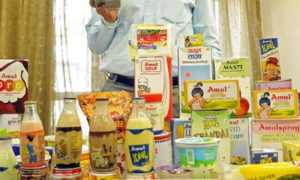 The country’s biggest dairy brand Amul has sent a legal notice to Google India, alleging that the technology giant has “benefited” from Google Search ad campaigns which are being “misused to scam individuals in the name of Amul”.

“A series of fake B2B campaigns regarding Amul parlours and distributors have started through fake websites using Google Search ads since September 2018,” said the legal notice sent by Gujarat Cooperative Milk Marketing Federation (GCMMF) that owns Amul. “These miscreants have been running paid ads on Google search engines against keywords such as Amul franchisee, Amul parlour, and Amul distributor among many others.”

ET has seen a copy of the legal notice issued on January 10. It alleged that these individuals and organisations have “malicious intents of exploiting individuals across India with fake promises of business opportunities with Amul” only to swindle them. Google India is “accountable for misuse of their platform and earning revenues through the ads”, the notice said. Google Ads platform is “allowing such miscreants to use its paid promotion services repeatedly without any background checks and in the process earning revenues from the click-based ads on their page”, it said. A Google India spokesperson in an email response to ET said the company was looking into the matter.

Amul’s legal notice has explained modus operandi of the alleged fraudsters. Once an individual — wooed by the offer to explore business opportunities with Amul, which sells packaged milk, butter, ice-cream and cheese — opens the ‘fake’ websites, he/she is required to fill a form. After that, they receive calls from unknown numbers prompting them to pay registration fees ranging from Rs 25,000 to Rs 5 lakh in various bank accounts. “Post receipt of the payment, the interested individuals stop receiving all forms of communication from these miscreants,” it said. The notice claimed that Amul had raised this issue with Google India and sought its help.