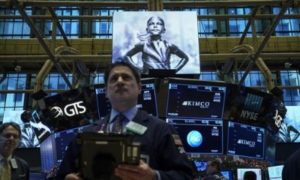 Asian stocks opened mixed as investors shrugged off a rebound in their U.S. counterparts from sharp losses, with trade and U.K. political concerns lingering. The pound held onto a slump after U.K. Prime Minister Theresa May delayed a critical vote on a Brexit deal. Benchmarks in Japan nudged lower, while stocks rose in Australia from a two-year low and South Korean shares were little changed. U.S. futures declined even after the S&P 500 Index recovered from the lowest intraday level since April to finish higher, buoyed by rallies in Facebook Inc. and Microsoft Corp. The dollar maintained gains and Treasuries were little changed. In Asia, Indian assets face pressure after the surprise resignation of the central bank’s governor. Derivatives tipped a rupee plunge.

“The message that you get from today’s action and from Thursday and Friday is that you should expect more of this going forward,” Alicia Levine, BNY Mellon Investment Management chief strategist, said on Bloomberg TV. “We are expecting volatility and we are expecting more large moves both to the upside and the downside,” she said.

The markets are far from being out of the woods yet. Traders may need to steel themselves for the possibility of the U.K. leaving the European Union without a deal, adding to a litany of concerns that have frayed sentiment, chief among them simmering trade tensions and clarity on the Federal Reserve’s interest-rate path in 2019.

On the trade front, a bail decision is pending for the jailed chief financial officer of China’s Huawei Technologies Co. Her arrest last week roiled global markets by raising concerns over prospects for U.S.-China talks.

Elsewhere, oil traded near its lowest in two weeks as doubts grew about whether OPEC and its allies can deliver enough output cuts to head off a glut.

The yield on 10-year Treasuries was steady at 2.85 percent. Australia’s 10-year bond yield rose one basis point to 2.45 percent.