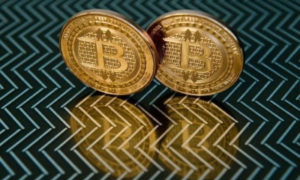 Hong Kong: Shares of several cryptocurrency-related companies in Asian markets fell after Bitcoin led a sell-off in digital currencies. Monex Group Inc., which owns the Japanese exchange Coincheck, and SBI Holdings Inc. fell over 2 percent to trade at two-week lows in Tokyo, while Vidente Co. and Omnitel Inc. retreated at least 4 percent in Seoul to lead declines among crypto-linked stocks.

Bitcoin, the largest cryptocurrency, plunged as much as 15% during US trading hours, and traded at $5537 as of noon Tokyo time, according to consolidated pricing data compiled by Bloomberg. Rival coins also retreated, as the industry braces for a contentious split in Bitcoin offshoot Bitcoin Cash.

“The $6,000 mark, which had been serving as a floor for a long time, gave way — this feels like a bit of a dangerous sign,” said Soichiro Tsutsumi, a trader with eWarrant Japan Securities K.K. in Tokyo. “Companies most impacted by the price move would be the ones with business models reliant on a client pool, on concern that the number of client accounts won’t expand.” 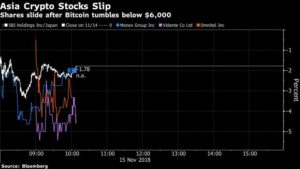 One stock bucking the trend was Ceres Inc., up over 18% for its biggest gain since January after reporting nine-month earnings.