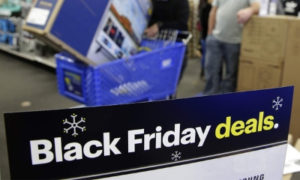 LONDON: British shoppers sought out Black Friday discounts in their droves last month, pushing retail sales growth to a six-month high, but the broader picture remains weak ahead of Brexit in little more than three months’ time. Official retail sales volumes, including the Black Friday sales period, jumped by a monthly 1.4 percent following two months of decline, surpassing all forecasts in a Reuters poll of economists that had pointed to a 0.3 percent gain. The Office for National Statistics (ONS) said the changing nature of Black Friday sales promotions posed a challenge for smoothing out seasonal variations in the data and economists said November’s jump was likely to be revised down.

“It’s worth treating these numbers with some caution,” ING economist James Smith said. “Whatever the case, it seems clear that the Christmas trading period has been a particularly challenging one for retailers.” In the three months to November as a whole, sales were up just 0.4 percent compared with the previous period, the smallest increase since April. The pound rose slightly to touch a day’s high against the U.S. dollar after Thursday’s figures. The November sales surge in the ONS figures contrasted with statements from some major retailers and business groups that showed a disappointing Black Friday. The Confederation of British Industry said retail sales between Nov. 26 and Dec. 14 suffered their biggest fall in 14 months, and that sales for the time of year were the worst since November 2011. It blamed a mix of squeezed household incomes, a shift to online spending and consumer jitters ahead of Brexit.

Online fashion store ASOS issued a profit warning on Monday as its November trading fell short of expectations, while the owner of the Primark clothing retailer said the market was “challenging” last month. The ONS said household goods sales leapt by 5.3 percent on the month in November, the biggest rise since the end of 2013.

Online sales as a proportion of all retailing exceeded 20 percent for the first time. Thursday’s ONS numbers will not influence the Bank of England’s policy announcement due at 1200 GMT because the central bank’s interest rate-setters have already concluded their December meeting. They did not see the ONS retail sales report in advance.

Economists expect no change in rates from the BoE but want to know how the central bank views recent signs of a slowdown in Britain’s economy. Growth has slowed since the Brexit referendum in June 2016 but household spending was strong over the summer of 2018. Britain’s scheduled departure from the European Union on March 29, with no clarity yet on whether it can leave with a transition deal, has weighed on consumer confidence.

November data from the British Retail Consortium and Barclaycard has shown households were cautious about spending. But there has been some comfort for consumers in recent data which showed the fastest growth in underlying pay growth since 2008 and inflation falling to a 20-month low of 2.3 percent.