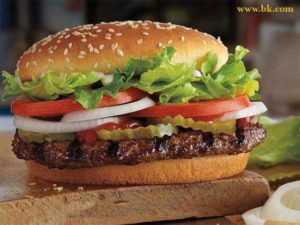 Burger King had entered India in 2014 and posted a 66% increase in sales at Rs 389 crore in FY18. In comparison, Tata Starbucks that opened its first store in 2012 grew 28% in revenue at Rs 348 crore. A year earlier, the Seattlebased coffee chain was ahead, with annual sales of Rs 272 crore against Burger King’s Rs 234 crore.

“Burger King India witnessed double-digit same-store sales and traffic growth, while continuing to open new restaurants at a rapid pace, exceeding all players,” said Rajeev Varman, CEO, Burger King India. “We continue to be on plan, as well as profitable at a restaurant level. We have increased our investments in growing brand awareness, sharpening our menu and value offerings and building the infrastructure in India, as we progress to launch over 500 restaurants by FY23.”

On a per-store basis, both Starbucks and Burger King posted average sales of Rs 3 crore, lower than rival Westlife Development, which runs McDonald’s in the South and West and had average sales of Rs 4 crore at each outlet. India has been the fastest-growing market in terms of store expansion for both chains — Burger King had 129 stores while Starbucks had 116 outlets until March this year. 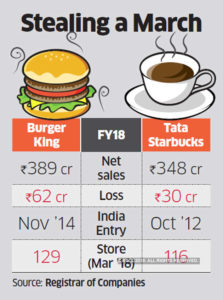 Burger King, however, notched uphigher numbers than Jubilant Food-Works (JFL), where average sales per outlet were at Rs 2.6 crore from both Domino’s Pizza and Dunkin’ Donuts.

The average price, both before and after promotions, was the lowest at Burger King compared with Domino’s and Pizza Hut between February and June this year, according to a UBS report.

Burger King, popular for its whooper burgers, had entered India in November 2014 when most quick-service restaurants were struggling with falling sales. The 66-year-old burger chain partnered Everstone Capital in India, which holds a majority stake in the company through subsidiary F&B Asia Venture. It has also lined up $100 million for expansion over the next few years.

“Although Burger King tried to open its stores next to McDonald’s, its overall reach is very less as of now. Also, we believe that Westlife Development will accelerate its store opening rate to 40-45 a year from FY20 going forward, which is line with the strategy of KFC and Burger King in India. Hence, the penetration gap between McDonald’s and other peers will remain,” said a report by Nirmal Bang Securities.