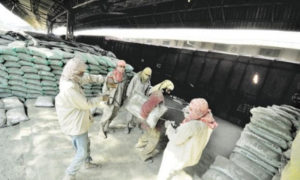 New Delhi: Cement makers may raise prices by ₹10-15 per 20kg bag by March, an industry association said. According to the Cement Manufacturers Association (CMA), the wholesale price of ₹300-350 per 20 kg bag will be ideal for the cement sector.

“Prices have remained stable or lower for the last three-four years in net terms to the manufacturers, while the costs have gone high due to freight prices and high power costs. The industry is looking at a hike by ₹10-15 per bag in next quarter of the fiscal,” said Shailendra Chouksey, president, CMA, in an interview.

The cement industry, which remained subdued for four years, picked up in the third quarter of FY19, driven largely by government initiatives such as Bharatmala, Housing for All, Swacch Bharat Abhiyaan, Sagarmala and metro construction. According to CMA, the focus on infrastructure has pushed up volume growth of the cement sector from 4% to 12% between September 2017 and September 2018.

“This drive is coming basically from government initiatives as they are not short-lived. For example, Housing for All will continue till 2022; same with Bharatmala and others,” said Chouksey, who is also whole-time director at JK Lakshmi Cement Ltd. He added that industry is excited that demand has picked up, though late. “The cement industry is very positive that demand has come to stay.”

“Although the government is driving demand, the rates offered by government contracts are as low as Rs 154-160 per bag, which is below manufacturing costs,” said an executive of a cement manufacturer, requesting anonymity.

According to CMA, the industry is well-equipped to meet an expected surge in demand for the next three to five years. CMA said the industry lacks pricing power because of the excess capacity, but once that capacity is put to use, cement prices are likely to see an optimum realization.