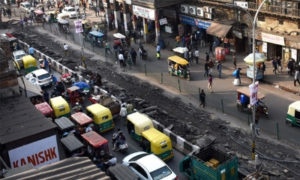 NEW DELHI: Traders, politicians and other stakeholders on Wednesday gathered at Town Hall in Chandni Chowk to discuss the ignored aspects of turning the place into the first pedestrian street by June 2019. The redevelopment work started on December 1, and, since then, several traders’ bodies have raised concerns over lack of consultation and traffic inconvenience caused to the visitors.

Goel said they were not against the redevelopment, but a multiplicity of agencies has been creating hurdles in the revamp and leading to a slow death of Chandni Chowk. “What we need is an empowered unified agency to take decisions for Old Delhi. Shahjahanabad Redevelopment Corporation (SRDC) has no teeth. Heritage character of the road should not be ruined,” he added.

Suresh Bindal, a trader, said they were not consulted before the project was set in motion. “No sites have been identified for loading and unloading of goods. Barricading roads has resulted in chaos. While everyone is worried about the main street, the plight of inner kuchas has been ignored.”

“They want to shift utility services, like urinals, water ATMs and transformers, to the central verge. But this will ultimately block the view spoiling the heritage character,” said Suman Gupta, former councillor from the area. Krishna Menon, the founder member of Intach, said those who planned the project didn’t give any thought to the dynamics of the markets.

Meanwhile, Sanjay Bhargava, president of Chandni Chowk Sarv Vyapar Mandal, said the issues related to the redevelopment plan could be sorted out with joint meetings with agencies concerned.

The foundation stone for the project will be formally laid by CM Arvind Kejriwal on December 7.