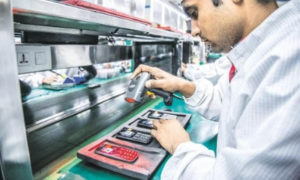 New Delhi: Phone maker Lava International Ltd was, not long ago, a leading poster boy of the government’s Make in India dream, with value-for-money offerings for the price-conscious customer, apart from playing a significant role in creating a domestic manufacturing ecosystem for mobile phones. Today, the nine-year-old company is facing a severe liquidity crisis, and failed to pay November salaries to employees on time.

Increased competition from Chinese smartphones that have grabbed the Indian handset market, deep discounting by e-commerce platforms and the heavy blow of demonetisation have led to turmoil in the company. At the same time, poor sales have led to cash flow problems with retailers who have not paid distributors, in turn affecting Lava’s sales and its suppliers as well.

In a letter dated 1 December addressed to employees, chairman Hari Om Rai said November salaries will be delayed and paid in two parts, and that payments to suppliers of the Noida-headquartered company have not been made in full.

“Our suppliers had to struggle due to late payments or less payments. In the last nine years at Lava or in my entire business journey of 26 years, none of the companies I have associated with has ever delayed salaries to its people, but at this juncture we had no other option but to delay salaries too. Employees of E band will be paid 60% of salary and above E band will be paid 40% of salaries on 1 December. Balance will be paid on/before 20 December,” Rai said in the letter.

Mint has reviewed a copy of the letter.

“We have been facing consistent disruptions over the last three years. Entry of highly prepared Chinese companies with ability to invest much ahead of the curve on retail and marketing…cash burn and predatory pricing by online platforms and online brands…even the economic downturn due to demonetisation largely impacted our segment of consumers…we were much underprepared for such heavy disruption,” Rai said in the letter.

The impact of demonetisation is also confirmed by a report released by the Indian School of Business in February. Four months after demonetisation of high-value currency notes was enforced on 8 November 2016, the impact was more pronounced on feature phone sales, where Indian handset makers dominate the market, than on smartphone sales, where Chinese and global firms predominated, the report said.

While the suddenness of the demonetisation announcement would have made it difficult for handset makers to shift manufacturing from feature phones to smartphones to meet the expected increase in demand, Chinese firms expanded credit lines, which enabled them to stock more products at stores and increase product availability. Hence, they were in a better position to exploit cash shortages among mobile distributors to aggressively promote their products, the report said.

Lava, with a nationwide retail network of 165,000 retailers who in turn are directly served by over 1,100 distributors, was banking on Diwali to boost sales, and planned a lot of inventory for September, October and November but sales slumped.

“Many retailers bought a lot of stocks from online on cash payment due to heavy discounting at online platforms but still due to lack of footfalls in their shop they could not sell their stock. This built cash flow issues with retailers and even after selling our products, they did not pay our distributors. This debt pushed distributors to not stock products at the outlets, which further reduced our tertiary sales. When our distributors could not get payments, our own sales and cash flows got impacted, which even impacted our suppliers, and we entered into the vicious circle as we were completely underprepared for this shock,” Rai said in the letter.