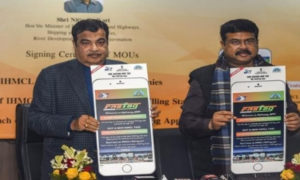 New Delhi: Making payments at petrol pumps will just be a matter of seconds as fuel retailers may soon adopt FASTags, used at toll plazas, as a mode of payment. Three state-run oil marketing companies IOC, BPCL and HPCL have already signed MoUs for sale of FASTags through their petrol pumps.

Road Transport and Highways Minister Nitin Gadkari has recently announced that plans are afoot that FASTags could be utilised by consumers for buying petrol and even for parking facilities.

Built on Radio-frequency Identification (RFID) technology, FASTags are reloadable tag which enables automatic payment directly from bank or prepaid accounts. Affixed on the vehicle’s windscreen, FASTags are currently in use for payment of toll fee at toll plazas across national and state highways.

The toll amount is deducted automatically by a tag reader when the vehicle approaches the toll plaza. The vehicle with FASTag doesn’t need to stop at the toll plaza for the cash payments.

At present, you need to maintain a prepaid FASTag account which can be recharged online. The tags can be bought from selected bank branches.

How will FASTags work at petrol pumps

To ensure faster roll-out of electronic toll collection across the country, FASTags would soon be available at petrol pumps. Unlike prepaid accounts, these new FASTags from Indian Highways Management Company Limited (IHMCL ) would be linked to bank accounts. It will also do away with KYC requirements as money will go through bank account, a road transport ministry statement said.

Two FASTag mobile apps have been launched by the Ministry of Road Transport & Highways for the purpose. My FASTag Customer app can do instant recharge of any FASTag through UPI and links IHMCL FASTag with your bank account. The ministry statement said wallet services are also proposed in the near future.

In the FASTag Point of Sales app, it is possible to create and manage distribution partners, as also to allow sales via petrol pumps.

National Highways Authority of India (NHAI) chairman Sanjeev Ranjan told PTI the authority is working on various plans to make FASTags as a base for transactions to buy petrol and pay parking fees. Once the mechanism is ready, the payment collection system will become smoother and quicker in petrol pumps.