MUMBAI: The share of women in corporate India’s headcount is stuck at an average 20% for the past five years, an indication that the gender diversity drives some of the top companies may have not yet delivered the desired results.

A survey of Indian and multinational companies by gender consulting firm ProEves also shows that at the top levels in India, the share of women was just 12%.

The survey findings are based on inputs from 50 leading companies across sectors with offices in India, including Walt Disney, Viacom18, InMobi, Novartis, Mondelez, Flipkart, Whirlpool, Bank of America Merrill Lynch and Philips. At junior levels, women account for 22% of the total employees. The share reduces to 17% at middle management, 14% at senior management and tapers further to 12% at the top level.

Compared with the US, participation of women in India is half across all employee groups. But industry expects this to change in the coming years.

“The policies (such as enhanced Maternity Benefits Act) or drives by companies to support women returning after a career break are recent in nature and we are yet to feel the good effects,” said Naina Lal Kidwai, chairman of the India Advisory Board of Advent International Private Equity. “Policies to have some impact will take some time,” she said. 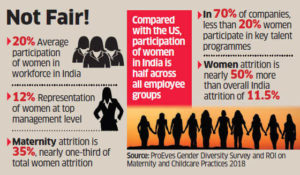 Prabir Jha, head of HR at Cipla, said a larger issue was the drop out of women from the workforce due to marriage, spouse relocation, maternity and other societal commitments. “While many companies have ushered in several progressive HR policies and some legal enactments too have been provided, managers are still struggling managing their workforce planning on account of these realities,” he said.

There is an even lower representation of women in key talent programmes compared with that in the workforce, which explains why there are fewer female executives in management positions.

Sareena Singh, global head of controls assurance at RBS India, said: “Companies are fostering the right culture that complements the policies and practices … But things also should be self-driven as much as driven through ecosystems around the person itself.”

According to the ProEves Gender Diversity Survey and ROI (return on investment) on Maternity and Childcare Practices 2018, in 70% of companies fewer than 20% women participate in key talent programmes such as initiatives for high potential, promotion, leadership development and mentoring.

Women attrition is nearly 50% more than overall India attrition of 11.5%. Among women who leave their jobs, around one-third is maternity attrition.

“There still is a strong maternity bias against women,” said Divya Agarwal, cofounder of ProEves. “Maternity continues to be a key reason for woman attrition even though companies are taking cognisance of this,” she said.

Falguni Nayar, founder of beauty and fashion retailer Nykaa, said: “I don’t think there is any bias. I have 40% women here and I can see many young mothers who are extremely committed to work.”

Jha of Cipla said women attrition was often a societal conditioning than an organisational blame. For arange of family issues, women at various stages start dropping out of the workforce, he said.

In March last year, Parliament approved a Bill granting women working in the organised sector paid maternity leave of 26 weeks, up from 12 weeks.

A poll conducted by social media platform LocalCircles in May showed that startups and small businesses were reluctant to hire women after the landmark Bill. The poll, which received 2,987 votes and asked businesses how their company’s hiring has been on gender basis in the last one year, showed that 57% either hired only or mostly male employees.

Several organisations are looking at ingenious ways to stop losing talent resulting from career breaks. These include flexible work arrangements like work from home to returning mothers, providing clarity on role on return, tracking each maternity case and ensuring connect with manager or mentor.