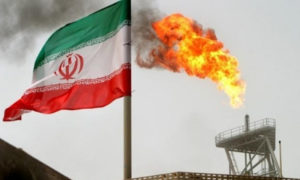 With India adopting a “wait and watch” policy ahead of US oil and banking sanctions on Iran from Sunday, the rationale behind the underplayed optimism displayed by the world’s third-largest oil consumer was best summed by Igor Sechin, chief executive of the world’s largest publicly traded oil company OAO Rosneft.

Speaking last month at Verona in Italy, Sechin, one of the most powerful men in Russia, said the US may “introduce a range of exemptions for some of its partners.”

These are the concessions that India has been eyeing and were hinted at by petroleum minister Dharmendra Pradhan on 8 October about India continuing its energy imports from Iran even in the wake of the US’ 4 November deadline. State-run refiners Indian Oil Corp. Ltd (IOC) and Mangalore Refinery and Petrochemicals Ltd have contracted 1.25 million tonnes of Iranian oil for import in November. Pradhan added that one does not know whether or not the sanctions have been waived.

To be sure, PTI reported on Thursday that India is close to striking a deal with the US that will allow it to continue buying crude from Iran without attracting sanctions after it agreed to cut imports and escrow payments.

Bloomberg reported India and South Korea have agreed with the US the outline of deals that would allow them to keep buying some Iranian oil, but no final decision has been made and an announcement is unlikely before sanctions are imposed.

India is a major importer of Iranian oil—of the 220.4 million metric tonnes of crude imported by India in 2017-18, more than 9% was from Iran. 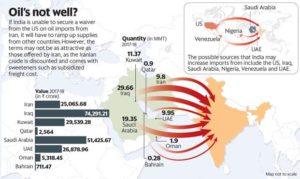 “Replacing a third of your crude supply source is never easy. However, Indian refiners are better placed today to face a disruption on crude supplies from Iran primarily due to their ability to process a wider range of crudes. Also, key suppliers, including Saudi, have expressed an intent to provide for any gap that gets created. Most importantly, the economics will need to be carefully considered, as it could easily lead to a further upward pressure on downstream petro products (petrol and diesel) prices,” said Anshuman Maheshwary, partner and head, energy and process industries at AT Kearney India.

“Also, we need to see if an alternative channel (non-dollar denominated) for payment and sanction waivers does materialize which allows for a continuation of at least partial volumes of Iran imports,” added Maheshwary.

India is not new to doing business with a sanctions-hit Iran. Indian banks put in place a rupee payment mechanism during the earlier round of sanctions against Iran over its nuclear programme, that included strictures against Iran’s energy and banking sectors.

The National Democratic Alliance (NDA) government is now exploring similar options, including barter, to tide over a situation that has been worsened by the slide in the rupee that has made it Asia’s worst performing currency of the year and instability in the energy markets.

Any rally in global crude oil prices will affect India’s oil import bill and trade deficit. Every dollar increase in oil prices has the potential to push up the import bill by around ₹10,700 crore on an annual basis. While crude prices jumped 50% in dollar terms and 70% in rupee terms since last year, the prices have fallen from the four-year highs reached earlier this month.

“While these are difficult times, we have all options open before us,” said a senior Indian government official requesting anonymity.

India has been trying to diversify its supply portfolio, with firms starting to source liquefied natural gas and oil from the US. The options before it include increasing imports from sources such as the US, Iraq, Saudi Arabia, Nigeria, Venezuela, and UAE. However, their terms may not be as attractive as those offered by Iran.

India has also sought a review of payment terms with major oil producers with the pitch being made by Prime Minister Narendra Modi himself during his meeting with top executives of global oil companies and experts from the energy sector earlier this month. He cautioned producers not to “kill the hen that lays the golden egg.”

The issue was not of “shortfall”, but of “sentiment”, oil minister Pradhan said earlier this month. “We are confident from day one. I am of this opinion —there is no problem in the sourcing of crude. There is plenty availability of crude in different parts of the world.”

However pricing may be an issue. India, which meets 83% of its crude oil requirements through imports and has been reeling under high oil prices, wants Organization of the Petroleum Exporting Countries (Opec) members to meet their output commitment. Opec that accounts for about 40% of global production is of the view that is “currently adequately supplied and well-balanced”.

Speaking at the 11th Eurasian Economic Forum, Sechin, a close confidante of Russian President Putin, was highly critical of US leveraging sanctions for its benefits and termed Opec’s spare capacity “insufficient” to mitigate any possible shortfall.

“Without the necessary resolutions of the UN Security Council, sanctions have turned into a conventional instrument controlled by a single country rather than the global community. Individual market players and whole countries have become “hostages” of the situation,” Sechin said.