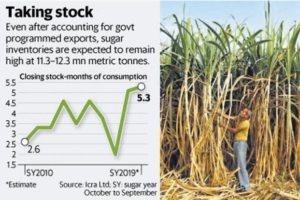 Dry weather, deficient rain and pest infestation have come as a blessing in disguise for sugarcane millers. As yields dropped and production estimates are revised lower, prices of the sweetener recovered, bringing relief for the share prices of the millers. But as the industry enters 2019, optimism is fading.

Prices began easing in November, tracking the onset of the crushing season and fresh supplies into the market. According to ratings agency Icra Ltd, sugar production in India is expected to decline by around 2% to 31.5 million tonnes (mt) in the current season. Even so, the sugar surplus scenario is likely to continue as the industry is carrying sizeable inventories.

Even after accounting for exports aided by the government, the industry is likely to hold 11.3–12.3 mt of stock, which is equivalent to 5.3 months of domestic consumption. This is the highest in recent years, Icra calculations show. Sugar season in India starts in October extending till September in the subsequent year.

On the positive side, the inventory is expanding amid adverse weather conditions (low rainfall, dry weather) in other major producing regions-Europe, Brazil, Thailand, and Pakistan, points out S&P Global Platts, an information services provider.

If the production in these countries drop, as feared, prices in global markets will get much required support, aiding India.

However, this calculation is coming under a cloud. High crude oil prices for much of 2018 have incentivized farmers in Brazil, a large exporter of sugar, to divert sugarcane for ethanol production, used as fuel.

With Brent crude prices falling as much as one-third, reducing the appeal of ethanol, there are fears Brazilian farmers will divert more sugarcane for sugar production in 2019, weighing on the sweetener’s prices in global markets.

Indeed, heading into general elections, the government is cautious about the ramifications. It stepped up incentives for ethanol production and is trying to strike bilateral deals to export sugar. But unless exports take-off, rising inventories can be a dampener for sugar millers.

Also, it has to be seen how much of a benefit sugar companies can derive from the favourable ethanol policy.

Low sugarcane arrivals and yields are limiting the scope for ethanol production.

Further, as M. Manickam, chairman and managing director of Sakthi Sugars Ltd, said in a recent interview to CNBC TV18, oil marketing companies are traditionally loath to buying ethanol, especially so when crude prices are falling.

How the government addresses these challenges will determine the earnings trajectory of the industry.