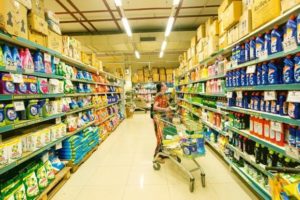 Mumbai: Shares of Avenue Supermarts Ltd, which operates DMart stores, today fell as much as 7.2%, erasing nearly Rs 6,000 crore market valuation, as many brokerages slashed price target after it reported lower-than-expected earnings. During the day, DMart shares fell as much as 7.14% to hit a low of Rs 1,310. At 10.30 am, the stock was trading at Rs 1,328 on BSE, down 6% from its previous close. So far this year, DMart shares gained 12.6%.

Selling pressure was on expectations that the earnings is not strong enough to justify valuations. Of the 15 analysts tracking DMart shares, five have buy ratings, two have hold ratings while eight have sell ratings, according to Bloomberg.

The company reported slower-than-expected earnings after it took price cuts across categories in the second half that affected its margins in the September quarter. Revenue growth was at 38% to Rs 4,870 crore.

“Amidst rising competition from online players, the company undertook price cuts across consumer categories in Q2FY19 which in our view is the right strategy but will result in margin pressure. We cut our EBITDA estimates by 3%,” said Jefferies India in a note to its investors.

“Strong execution continues and proactive price cuts reflect management’s paranoia about growth and market share. Though DMart will be one of the key beneficiaries in the organised grocery retail space, trajectory of earning growth will taper down viz-a-viz built in the valuations keeping risk reward unfavourable (trading at 40x EBITDA FY20). We roll over to Sep20 EBITDA and cut our target EBITDA multiple to 35 times (from 40 times earlier)”, the report added. The brokerage firm has maintained its hold rating on the stock but cut its target price to Rs 1,375 a share from Rs 1,470 a share.

Store additions for the quarter stood at just three and five for the first half of the fiscal 2019. The total store count stood at 160 as of September 2018.

“This is a relevant metric to monitor as we think the stock seems to price acceleration in the pace of store expansion with steady operating metrics”, said Citi Research Equities in a note. The brokerage firm has maintained its sell rating on the stock and cut its target price to Rs 1,255 a share from Rs 1,411 a share earlier.