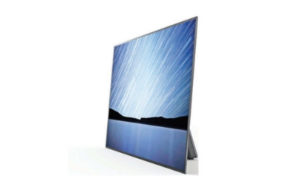 Market leader Samsung Electronics has stopped making televisions in India and is now importing them from Asean countries, while LG Electronics is said to be considering following suit.

A senior official of the ministry of electronics and information technology said the government is contemplating removing the 5% duty since it has been a blotch on efforts to encourage manufacturing in India. The Department of Industrial Policy and Promotion backs the move and a final decision will be taken in consultation with the finance ministry, the official said. 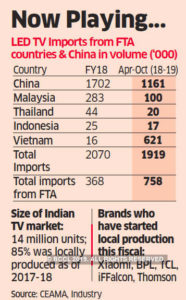 65-70% OF A TV’S PRODUCTION VALUE
Most items imported under free trade agreements are not charged duty. The electronics ministry has already consulted twice with senior officials of Samsung and LG and with officials of the Consumer Electronics and Appliances Manufacturers Association (CEAMA) to understand the issues.

“Every area that encourages domestic manufacturing is an area of focus. We have received representations from the industry and company officials to reduce duty on open cell TV panels to 0%. It is under serious consideration and a decision is likely soon,” the ministry official said.

However, an LG India spokesperson said the company believes in ‘Make in India’ and will continue local production. “Every year, we continuously invest to strengthen our manufacturing facilities and will continue doing the same in future. In fact, we are manufacturing our entire line-up of TVs, including premium range, in India,” the spokesperson said. Emails to Samsung India remained unanswered till Monday press time.

Imports from Asean surged last year after Samsung started bringing TVs in from Vietnam. The volume from Vietnam surged from 16,000 units in 2017-18 to over 600,000 units in the April-October period of 2018-19, according to data collated by CEAMA from the ministry of commerce and industry. Imports from other countries were lower in the period.

The government first imposed 10% import duty on open cell TV panels in the February 2018 budget and reduced it to 5% in March after the industry said it would affect investment. Open cell panels – which require some assembling and value-addition before being ready – account for 65-70% of a television’s production value.

Contract manufacturer Dixon Technologies chairman Sunil Vachani said there are no open cell panel manufacturing plants in India and setting up one of these will take about four years.

“The government should come up with a phased manufacturing programme for television, like mobile phones, so that manufacturers can have a clear roadmap,” said Vachani. “The component industry goes where the final manufacturing happens. To encourage that, there should be a level playing field right now and duties on open cell should be imposed after the manufacturers of these products start local production.”

Samsung’s used to make about 1 million TVs a year at its Chennai plant . The closure of its television line started in August and was completed by October.

Samsung’s TV facility in Chennai supports an employment ecosystem of thousands, India vice president of corporate affairs Manu Kapoor had said in a letter to the finance minister last February, when the 10% duty on open cell panels had been levied. The letter had also said the firm may stop TV production in India unless customs duty on display panels was withdrawn.