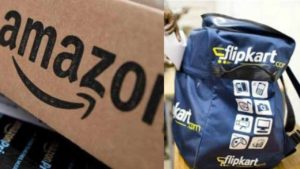 New Delhi: E-commerce companies in the country are estimated to have raked in sales worth Rs 15,000 crore in about five days of their festive sales with giants like Amazon India and Flipkart claiming stellar show across categories like smartphones, large appliances and fashion. RedSeer Consulting in its report said e-tailers had a better “sales performance over the five festive days from October 9-14”, generating about Rs 15,000 crore (around USD 2 billion) in sales. This translates into about 64 per cent year-on-year growth compared to USD 1.4 billion (around Rs 10,325 crore) generated in the 2017 edition.

“The industry witnessed a higher growth this time compared to the last year. This was driven by multiple drivers, key being a larger shopper base from tier II (and beyond) cities. Affordability and loyalty schemes introduced by e-tailing players also played a huge role in converting the visitors into shoppers,” RedSeer said.

“The event exceeded our most aggressive plans across all the categories…more than 80 per cent of the new customers came from small towns, and we received orders from 99 per cent of the serviceable pin-codes in the country in just four days,” he added.

He added that smartphone sales accounted for the largest portion in terms of value, while fashion was the biggest in terms of the units shipped.

“Fashion was also the biggest category in terms of acquiring new customers with 63 per cent orders coming from tier II and III cities… We also saw 2 out of 3 customers using schemes like exchange, EMIs and bank offers,” he explained.

Interestingly, Amazon’s Hindi Website, which was launched recently, saw 2.4 times new customers coming and shopping on the platform as compared to a non-sales day.

Arch rival Flipkart said its latest edition of the Big Billion Days sale has “smashed all the existing records to set new benchmarks for the entire Indian retail industry”.

“Flipkart has recorded over 70 per cent share of entire Indian e-commerce market in the 5 day-BBD’18 sale, matching scale with global marquee retail events…Gross merchandise value (GMV) grew 80 per cent over the last year, whereas units grew by close to 2X year-on-year,” a Flipkart spokesperson said.

Walmart-backed Flipkart claimed to be cornered 85 per cent share in online fashion market and 75 per cent share in large appliances category during the sale, while three-in-four smartphones bought between October 10-15 in India were on Flipkart.

The spokesperson said there was almost 50 per cent growth in number of new customers coming in, while one out of two shoppers used payment schemes like EMIs and bank offers.

Flipkart pointed out that it saw close to 25 million people visiting its app on one of the sale days. This is the first mega shopping event being organised by Flipkart after Walmart acquired 77 per cent stake in the company in a USD 16 billion deal earlier this year.

Paytm Mall, which is backed by investors like Alibaba and SoftBank, said over 12 million items were sold on its platform, led by categories like mobile phones, consumer electronics, fashion and groceries.

It added that it had registered five times increase in transactions and sales compared to regular days with over 60 million visitors coming to the platform during the week-long sale. Also, over 2 lakh shopkeepers participated in the sale.

ShopClues, which crossed the 1.5 million-order mark, said over 75 per cent of its orders came in from tier III and IV towns, especially, from states like Karnataka, Kerala, Tamil Nadu, Assam, Gujarat, and Punjab.

For Snapdeal, new buyers account for about 38 per cent of all the orders placed during the sale so far.

Paytm Mall kicked off its festive sale from October 9, while the others began a day later. While the first leg of the sale ended on these platforms on Sunday and Monday, more offers are expected to be rolled out as Diwali approaches.