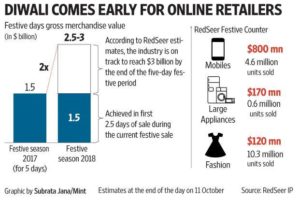 Bengaluru: After less than two days into the festive season sale, India’s top online retailers Flipkart and Amazon have claimed record-breaking numbers and indicated that their sales during the first two days have already surpassed the overall sales that they generated during the entire five-day sale last year.

On Wednesday, Amazon India said that it recorded its biggest ever day in terms of sales and that the massive opening was driven by categories such as smartphones and large appliances.

Amazon claimed that three out of every four smartphones sold in the country were on its online marketplace. Amazon’s Great Indian Festival started on 10 October and ends on 15 October. Flipkart claimed that it recorded the best ever start to its five-day Big Billion Days (BBD) sale. It said the sales during the first 26 hours had already matched that of its five-day sale last year.

Mint had first reported on 17 August that Flipkart’s chief executive officer Kalyan Krishnamurthy has set aggressive sales targets for the festive season and the company aims to touch $1.5-1.7 billion in sales during BBD.

RedSeer indicated that the e-commerce industry is well on track to touch $3 billion of GMV by the end of the five-day period.

Most of the sales have largely been driven by the smartphone business, which accounts for over 50% of all e-commerce sales in India.

According to RedSeer, smartphones accounted for nearly $800 million in gross sales during the first two days of the ongoing sale.

An earlier report from Counterpoint Research had indicated that the online sale of smartphones is likely to cross $1 billion during the five-day festive period, with a majority of them being sold on Flipkart and Amazon.

While both Flipkart and Amazon have claimed record numbers so far, it remains to be seen which company ends up with higher sales at the end of the festive period. Over the last two years, Flipkart has come in ahead of Amazon in terms of overall sales. This year, both companies are expected to be neck and neck till the sale ends, though Flipkart has an edge over Amazon in the smartphones business as it has more exclusive partnerships with top brands.

“This year it is not just about smartphones, electronics and fashion. This year we are going the whole hog, across all categories. This year, our beauty products business has done extremely well. We’ve sold plenty of internationally branded perfumes. We’ve sold 500 perfumes per minute throughout the sale so far,” said Smrithi Ravichandran, senior director at Flipkart.