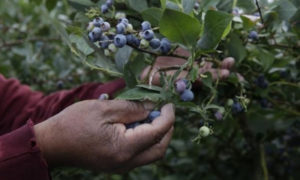 The Trump trade war with China and a late-blooming bumper crop in the U.S. are combining to curb the amount of fresh table grapes imported from Chile when the weather turns cold.

That’s forcing the South American country to look to Asia to sell off its fruit in the latest example of an unexpected market getting caught up in the U.S.-China spat. California grapes get harvested into the fall, but in December — as those supplies dissipate — the U.S. turns to Chile for fresh fruit.

This year, though, with plenty of leftover domestic inventory, there are signs that American demand for imports is set to decline. The result: Chile, the world’s biggest exporter of table grapes, fresh blueberries, plums and cherries, is being forced to seek out alternative destinations. The U.S. is usually its biggest buyer.

“We’re dealing with the situation by looking for new markets, specifically Southeast Asia,” Ronald Bown, chairman of the Chile Fruit Exporters Association, said in an interview in Santiago.

In California, the main source for grapes in the U.S., there’s also a late harvest that has begun to compete with southern-hemisphere farms. 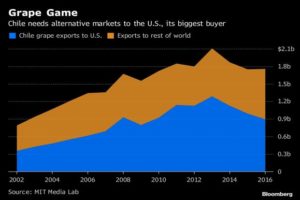 As that fruit continues to make its way to grocery stores, and with the domestic glut off the back of the trade war, it “makes sense” that rival suppliers abroad are seeking other markets, Kathleen Nave, president of the California Table Grape Commission, said in an email.

Meanwhile, Chile is also dealing with headaches in the nut trade.

India raised tariffs on walnut purchases to 100 percent from 30 percent, a response to U.S. President Donald Trump’s decision to target global shipments of steel and aluminium. India applied the retaliatory levy across the board, not just on U.S. walnuts. Chile is one of the world’s top three exporters.

Containers of Chilean walnuts sailing for India were re-routed in May as clients sought to circumvent the tariffs by shipping to other countries, Nicolas Di Cosmo, president of industry association Chilenut, said by phone.

“Crises normally create opportunities,” Di Cosmo said. “But the trade war is affecting the healthy flow of goods to such an extent that it’s nullifying any type of opportunity there could be.”