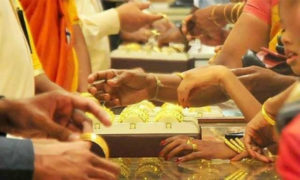 NEW DELHI: Offsetting four days of losses, gold prices on Monday recovered Rs 390 to close at Rs 31,850 per 10 gram at the bullion market in the national capital on rise in demand from local jewellers amid firm trend overseas.

Silver followed suit and shot up by Rs 800 to 37,360 kg on strong demand from industrial units and coin makers.

Traders said rise in demand from jewellers and retailers and strong global cues led to a spurt in gold prices.