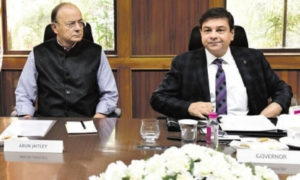 The Economic Times reported on Tuesday that the Narendra Modi government had invoked Section 7 of the RBI Act for the first time in the history of independent India. At the same time, news agency Reuters reported on Wednesday morning that RBI governor Urjit Patel may consider resigning, indicating that either side will force the initiative in the coming days.

When contacted, the finance ministry spokesperson said that no information was available with him. Senior government officials also did not respond to messages seeking comments.

“We did not invoke Section 7 in 1991 or 1997 or 2008 or 2013. What is the need to invoke the provision now? It shows that the government is hiding facts about the economy and is desperate,” Chidambaram wrote on micro blogging site Twitter.

Tensions between the Patel-led RBI and the government have been simmering from at least the beginning of this year. The government found the RBI’s 12 February circular on stressed assets that did away with all restructuring schemes and forced banks to make higher provisioning for all such loans a tad too strict. An open war of words broke out after Jaitley blamed the RBI for not doing enough to prevent the Rs 14,000 crore Nirav Modi fraud that hit Punjab National Bank. Patel, in a speech countered this, pointing to the lack of regulatory and supervisory powers with the RBI when it comes to state-owned banks. He had said a system of dual regulation existed for state-owned banks and the RBI had no powers to remove their bosses or restructure their boards.

More recently, the government has been pushing for relaxation in the prompt corrective action framework that saw the RBI impose lending restrictions on 11 state-run banks, arguing that credit flow to the SME sector was being affected. The RBI did not accede to this.

Following concerns raised by non-banking financial companies over lack of liquidity, the government also favoured a special liquidity window. But again the RBI did not agree.

The RBI also opposed the draft of the new payments and settlement law that proposed an independent payments regulator, clearly limiting the central bank’s say in the matter.

Tensions escalated after RBI deputy governor Viral Acharya in a speech last Friday stressed on the need for the RBI’s autonomy, arguing that governments facing election pressures had a short term outlook whereas the central bank had a longer term view. He added that undermining the RBI would invite market wrath.

Jaitley countered this Saturday, saying an elected government was accountable to the people. On Tuesday, Jaitley accused the RBI of looking the other way when banks were lending indiscriminately between 2008-2014.

Further in the day, officials of the RBI and the government sparred over issues like credit offtake and liquidity crunch in the economy in the meeting of the Financial Stability and Development Council.