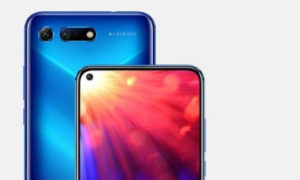 Huawei sub-brand Honor’s V20 smartphone was unveiled in China on Wednesday. The smartphone is Honor’s first smartphone to sport a punch-hole display, which is a new smartphone aesthetic which aims at skipping the notch cutout, which became a defining feature of 2018 smartphones. It is also packed with the best Huawei and Honor has to offer, which includes the top-of-the-line processor and a 48MP rear dual camera setup.

A day after its Chinese launch, Honor has announced in partnership with Amazon.in that the Indian variant of the Honor V20 smartphone, the Honor View 20, will be sold exclusively through the e-commerce website.

Speaking on this tie-up, Noor Patel, Director – Category Management, Amazon India said, “With this partnership, we continue to build a strong portfolio in the smartphones category, providing customers with a vast selection, unmatched value and fast & reliable doorstep delivery.”

The Indian price of the Honor View 20 is yet to be announced.

Going by its Chinese launch, the View 20 comes with a 6.4-inch LCD display with a resolution of 2310×1080. As mentioned earlier, the display has a punch-hole cutout which sits at the top left corner of the display. This gives the smartphone a screen-to-body ratio of 91.82%.

Powering the device is Huawei’s HiSilicon Kirin 980 chipset based on a 7nm process. The octa-core processor is also present on Huawei’s current flagship, the Mate 20 Pro. It is paired with a Mali G76 MP10 GPU along with up to 8GB of RAM and 256GB of internal storage. The View 20 runs Magic UI 2.0.1 based on Android Pie 9.

The back of the smartphone sports a 48MP Sony IMX 586 sensor which was launched in June with the highest megapixel count in the world for a smartphone camera sensor. There is also a secondary Time of Flight (ToF) stereoscopic sensor for capturing the depth of an image. The front camera is fitted with a 25MP sensor with f/2.0 aperture.