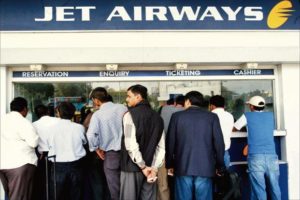 How do frequent flyer programmes work?

A frequent flyer programme is a loyalty programme offered by an airline aimed at encouraging customers to accumulate points (also called miles, kilometers, or segments in various cases). These points may be based on the class of fare, distance flown on that airline or its partners, or the amount paid. Another way to earn points is to spend money at associated retail outlets, hotels or other associated businesses. Points can be redeemed for travel, other products or services, or for increased benefits such as travel class upgrades, airport lounge access, fast track access, or priority bookings.

Which airlines have a loyalty programme?

Domestic airlines such as Jet Airways, Air India, Vistara, SpiceJet and GoAir have frequent flyer programmes where they offer customers various benefits. All major international airlines have their own frequent flyer programmes. Also, frequent flyer points earned on air travel on airlines like Air India and Jet Airways, which also fly on international routes, can be redeemed on their partner airlines. For instance, points earned by travelling on Air India can be redeemed on flights of airlines that are members of Star Alliance, since Air India is a member of the global alliance.

What is the valuation of Jet Airways’ frequent flyer programme? 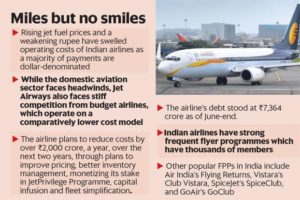 What are the major sources of cash inflows for the loyalty biz?

According to a 2013 paper from EY, there are three main sources of cash inflows for the loyalty business. One, gross margin on points redeemed, which is the spread between the cost of points and the price for which they are sold to commercial partners. Another is the expiry of unused points, which results in no reward and no associated costs. Frequent flyer programmes enjoy high profit margins, have low capex requirement and are strong cash flow generating businesses.

What drives up value of frequent flyer programme?

It depends on many things. Programmes that are able to enrol more members and incentivise members to fly with their parent airlines make for good value propositions. “Also, the airline’s market position and the strength of the credit card sector in the airline’s home countries are major factors in propelling the success of co-branded credit card placement and other financial partnerships,” said On Point Loyalty in a November report.