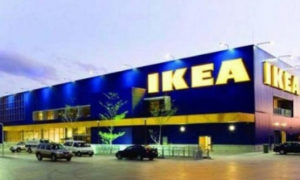 NEW DELHI: Swedish furniture retailer Ikea on Wednesday signed a memorandum of understanding (MoU) with the Uttar Pradesh government to invest Rs 5,000 crore in setting up an ‘integrated commercial project’ and opening stores in the state. The investment is expected to help create 8,000 direct and indirect jobs over the years.

Ikea said the first store in the state is expected to come up in Noida for which the Swedish company has not yet signed any land deal.

The MoU was signed in the presence of chief minister Yogi Adityanath, with Ikea represented by its country property manager David McCausland.

Peter Betzel, CEO at Ikea India, said the company plans to set up a mix of large and smaller city centre format stores, complimented by ecommerce, in the state over time. “The immediate plan is to set up a large format Ikea store in Noida where we are exploring opportunity for suitable land purchase,” he said.

The world’s largest furniture and home products retailer — which received India’s approval in 2013 to invest Rs 10,500 crore to build supply chain infrastructure and open 25 stores by 2025 — opened the first Ikea store in the country in Hyderabad in August.

Ikea has also purchased land in the range of 10-23 acres in Mumbai, Bengaluru and Gurgaon to build large-format stores. The company typically invests around Rs 1,000 crore per store, including the land and construction costs. It plans to open a 4,00,000 sq ft store in Navi Mumbai next year. Ikea also plans to have some small format outlets in India and the first truncated version is expected to come up in Mumbai. Noida outlet could be the second Ikea store in the National Capital Region. The company had last year purchased a 10-acre land in Gurgaon for Rs 842 crore, in the single-largest property auction for HUDA.

“The state government will provide all possible help to such investors,” the Uttar Pradesh government said in a statement on Wednesday. Ikea had signed an MoU with the previous government led by Akhilesh Yadav in 2015, which spoke of opening stores in Lucknow, Noida and Agra with investments of Rs 500 crore each.