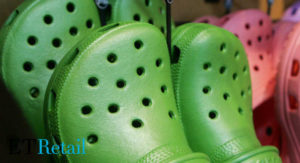 NEW DELHI: India is one of the fastest growing markets for US casual footwear brand Crocs, a top executive of the company has said. Carrie Teffner, CFO, Crocs, said besides the US, the top five markets for the company are China, Japan, South Korea, Germany and India.

“India will grow as one of the top-tier markets because we know the potential here is fantastic,” Teffner said in an interview with ET here on Tuesday. Globally, Crocs sells 55 million pairs of footwear every year.

In India, it sells its products through 90 exclusive stores, hundreds of multi-brand stores and also through ecomm platforms. All the exclusive outlets here are franchisee run, and Crocs does not have any immediate plan to apply for single-brand retailing licence to open its own stores.

“In these markets, it makes a lot of sense for us to partner with those people who run franchisee stores,” Teffner said, adding that in markets where they opened their own stores, they found them to be not so profitable, growth too, has not been as quick as it would have been had the stores been turned over to partners. Deepak Chhabra, CEO, Crocs India, said south and west India are the biggest markets for the company.

“Because of the climatic condition, south and west happens to be our bigger markets, but north is picking up very fast,” said Chhabra. “Growth is happening faster in the north.” A few years ago, Crocs tried to diversify from its clogs into sandals and shoes. Today, clogs account for about 50% of the company’s sales while sandals make up for about a quarter. Crocs’ products are made in China and Vietnam through third-party manufacturers.