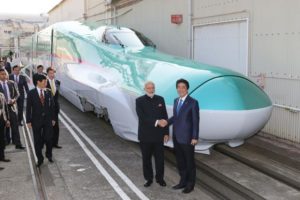 New Delhi: India’s bullet train project is moving at the pace of a commuter train instead. A year after the project was kicked off, only 0.9 hectares of land have been acquired out of the 1,400 hectares needed, according to the Indian government company leading the project. The $15 billion facility, the highlight of Prime Minister Narendra Modi’s drive to upgrade infrastructure, is facing resistance from farmers unhappy with the compensation for land taken away from them.

The planned 316-mile line linking the financial capital of Mumbai with the economic hub of Ahmedabad — roughly the distance between Los Angeles and San Francisco — was meant to be a big leap from the trains of Indian Railways, Asia’s oldest network with over 165 years of history. At the current rate of land acquisition, the bullet train built with Japan’s ‘Shinkansen’ technology risks missing its 2023 completion target.

“Land acquisition is a very common problem in India and many projects are delayed, there’s no question about that,” said Raghbendra Jha, an economics professor at the Australian National University. “I’ve seen many instances like this.”

The protests highlight the challenge Modi faces in implementing his flagship projects across railways, ports and airports to cement India’s position as world’s fastest growing economy. Projects worth 754 billion rupees ($10.2 billion) were completed in the quarter ended September 2018, less than half of the targeted 2 trillion rupees, according to the Centre for Monitoring Indian Economy.

“The project is very high-level and highly visible, publicity-wise,” said Nilanjan Mukhopadhyay, a political analyst and author of a biography on Modi. “If people are beginning to protest, this is going to undermine Mr. Modi’s image as someone who can implement things very seamlessly.”

For Japanese suppliers to the bullet train such as East Japan Railway Co., Hitachi Ltd. and Kawasaki Heavy Industries Ltd., the Indian project was a big victory over China’s CRRC Corp., Siemens AG and Bombardier Inc. After years of international marketing, India became a rare buyer for the Shinkansen.

A group of farmers affected by the project have petitioned the Gujarat High Court, which has sought the government’s stand on the plea on Nov. 22, according to court documents. The farmers have also questioned the government’s power to acquire farm land for public-private partnership projects, documents show.

The courts had earlier refused to put the land acquisition process on hold.

The National High Speed Rail Corporation, which is building the Indian project, said there are no funding gaps despite the delay in land acquisition. The date of operation for the project will be in August 2022, said Dhananjay Kumar, a spokesman for the company, a year before its official completion target. The company is “committed to take care of the interests of the affected farmers,” he said.

Farmer protests have stalled projects in India in the past. A decade back, Tata Motors Ltd. had to delay selling the world’s cheapest car, the Nano, after violent protest by farmers forced the owner of Jaguar Land Rover to abandon a factory in the state of West Bengal and instead choose a new site in western Gujarat. Land acquisition has also been an issue in the potential construction of an oil refinery with Saudi Aramco in Maharashtra.

India isn’t the only country where a planned bullet train has struggled to take off because of land acquisition problems.

A $6 billion high-speed rail project connecting Jakarta and Bandung is entangled in Indonesia’s infamous red tape and difficulties in acquiring land for the project. While construction was meant to begin in August 2016, only 7.6 percent of the work has been done on the 142-kilometer railway line at the end of August, according to the Jakarta Post.

For Shailesh Kumar, director for Asia at political risk consultancy Eurasia Group, land acquisition is “an eternal story” in India. “But I have a suspicion that once the bullet train is there, and users accept it, you’ll see massive expansion,” he said.

Project Highlights: The official target for completion is 2023. India says it will attempt to have it running a year earlier Total estimated cost is 1.08 trillion rupees While the train is designed to run at 350 kilometers per hour, it will operate at a maximum speed of 320 kilometers (200 miles per hour), cutting down travel time between the two cities to about two hours from about seven hours Most of the corridor will be elevated, but will include a 21-kilometer tunnel with seven kilometers under the Arabian Sea.