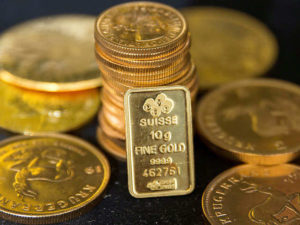 Gold buyers in India, the biggest market after China, may give jewelry stores a miss in the run-up to the Diwali festival this year because of a surge in domestic prices to the highest level in more than two years.

Bullion has climbed in local markets because of a weak rupee, and rising prices just before the celebrations of Diwali and Dhanteras aren’t good for demand, said Chirag Sheth, an analyst with Metals Focus Ltd. in Mumbai. Plus, “overseas spot gold has, in the last two or three days, shown the first signs of breakout,” he said. “If this trend continues, then it’s going to be a dampener.”

The most auspicious day of the year to buy gold is Dhanteras, which falls on Nov. 5, two days before the Hindu festival of Diwali. Wearing or gifting of jewelry is thought to bring good fortune during celebrations and weddings. The last quarter of the year is the season of peak demand, with Indians buying almost 240 metric tons on average in the past four years, according to the World Gold Council. 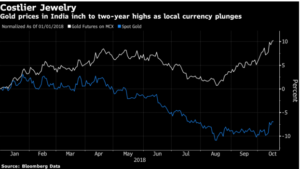 Gold futures on the Multi Commodity Exchange of India Ltd. have climbed 9 percent this year to the highest since July 2016, while overseas gold has dropped 6 percent. Analysts expect the rupee to extend its worst run of losses in 16 years. The South Asian nation imports almost all the gold it consumes.

“Demand is very low this year,” said Nitin Khandelwal, chairman of the All India Gem & Jewellery Domestic Council. Still, he remains optimistic of a spurt in purchases around Diwali “as no marriages can happen without jewelry.”

While people will make their customary purchases for the festival, the higher prices may trim the amount of gold being bought, he said. That’ll cool some optimism among merchants who’d been encouraged by a doubling of gold imports from a year earlier in the past two months.

The country’s biggest listed jewelers fell on Wednesday even as the benchmark stock index advanced. Titan Co., the largest maker of branded jewelry by market value, lost as much as 0.9 percent, while Tribhovandas Bhimji Zaveri Ltd. tumbled 1.7 percent.