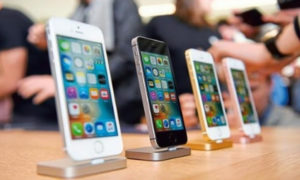 San Francisco/Washington: A Chinese court’s preliminary ban on iPhone sales is another step toward a potential settlement of the long legal battle between Apple Inc. and Qualcomm Inc.

A decision on Monday by the Fuzhou Intermediate People’s Court made the two-year dispute over complex smartphone patents very real for Apple investors and analysts. The court issued an injunction against the sale of several iPhone models. Apple called it a ‘desperate move’ and said the company intends to fight.

Apple and Qualcomm are fighting over intellectual property covering wireless networks and devices. Apple has accused Qualcomm of illegally charging too much for licenses. The chipmaker is using other patents that cover some aspects of the way phones work to attack back. It has used the common industry tactic of seeking bans on potentially infringing products to try to force a settlement. Monday’s ruling is the first instance of this approach producing real-world results.

‘Apple will eventually have to come to the negotiating table with Qualcomm,” said Timothy Lesko, a fund manager at Granite Investment Advisors.

In addition to the Chinese case, Qualcomm has filed complaints against Apple in Munich and Mannheim, Germany, and lodged another one with the U.S. International Trade Commission in Washington. All three venues offer it the chance, if successful, to shut down or limit the sale of the iPhone, a product that generates the majority of Apple’s revenue.

“The threat does get people serious about trying to settle things,” said Paul Berghoff, a patent lawyer with McDonnell Boehnen Hulbert & Berghoff. Whether it will work “depends on how much pain this inflicts on Apple.”

In December 2011, Motorola Mobility won a court ruling in Germany banning several iPhone and iPad models from being sold in the region. This went into effect in February 2012, and Apple pulled the devices from its online store there. But the company got the injunction suspended soon after and won ongoing protection from the original ruling.

Courts in Germany have so far declined take the same drastic action as the Fuzhou Intermediate People’s Court. In the U.S., a trade judge recommended against an import ban on Apple, even if the iPhone maker is found to infringe Qualcomm patents. Indeed, Monday’s decision in China excludes the latest iPhones, and Apple said its handset are still on sale there.

But the ruling increases political risks for Apple, which is embroiled in a broader trade dispute between the U.S. and China, according to analysts. Aaron Rakers at Wells Fargo Securities said the Fuzhou court’s decision was politically motivated. China accounts for about 18 percent of iPhone shipments, Rakers said, citing data from research firm IDC.

Qualcomm needs to settle the dispute more than its legal opponent. Apple stopped paying licensing fees — the chipmaker’s main source of profit — and no longer uses its chips in the iPhone. That’s contributed to a string of annual revenue declines for Qualcomm.