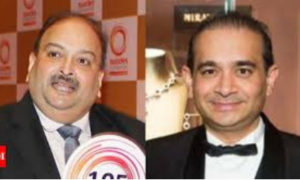 JAIPUR: The Congress on Monday alleged that income tax department was aware of the shoddy dealings of Nirav Modi and Mehul Choksi who had duped the Punjab National Bank of Rs 26,306 crore as early as June 2017 but the government gave them a free pass to leave the country.

Randeep Surjewala, AICC in-charge of communications while addressing the media here at the PCC office said that during the 44 months, country witnessed a Tsunami of bank fraud cases.

He said, during the Modi government till January this year, 19,000 bank fraud cases involving Rs 90,000 crore have been committed and 23 fraudsters escaped after duping the country of Rs 53,000 crore.

“Successive escape of Vijay Mallya, Lalit Modi, Nirav Modi, Mehul Choksi, and others reflect that Modi government is not the guardian of public money but a ‘travel agency’ facilitating fraud and fleece and fly to foreign shores,” he alleged.

He said, a 10,000 income tax probe report of June 6, 2017 on Mehul Choksi and Nirav Modi was not shared with Serious Fraud Investigation Office (SFIO), Central Bureau of Investigation, Enforcement Directorate and Directorate of Revenue Intelligence till February 2018.

Surjewala aged that this is the reason the chairman of the Central Board of Direct Taxes (CBDT) Sushil Chandra was given unprecedented two extensions by the Modi government.

According to the Income tax report, the documents claimed to be submitted by Jade Bridge and Forcom were prepared at Nirav Modi’s office in India and the source of this fund remains suspicious.