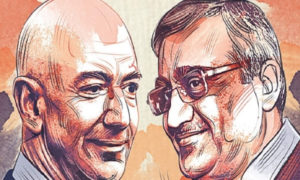 MUMBAI | NEW DELHI: Future Group’s founder Kishore Biyani is negotiating a wider agreement with Amazon that will provide the world’s largest online retailer the option to buy him out in the future, said multiple sources aware of the discussions.

Both sides are drafting a call and put option in their share purchase agreement that will allow Amazon to call for Biyani’s stake in flagship Future Retail Limited (FRL) over the long term, possibly as much as 8-10 years, subject to Indian laws. FRL operates all food and grocery stores such as Big Bazaar, Easy Day and Nilgiris.

Biyani and Amazon are close to finalising the first leg of their agreement wherein the Seattle-headquartered retailer will buy up to 9.5% stake in FRL through the foreign portfolio investor (FPI) route. That announcement got delayed and is now expected in December.

Both Biyani and an Amazon spokesperson said they don’t comment on speculation.

As promoters, Biyani and his family members own 46.51% of the company, of which 40.3% is pledged as per September 2018 filings. A person familiar with the discussions said the 9.5% stake will give a toehold to Amazon in FRL, but what is more important for the online retail giant is the option of taking over the company in the future. 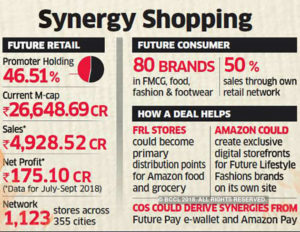 “Amazon is betting that with gradual FDI relaxation in food processing and single-brand retail over time the current freeze will be removed,” said an official on condition of anonymity as the discussions are in private domain. “Meanwhile, a clear realignment involving global players is happening in Indian retail and Biyani too would want to capitalise on that.”

Amazon picked up a 5% shareholding in Shoppers Stop last year. Along with Samara Capital, it recently acquired a stake in More supermarket chain, which was previously owned by the Aditya Birla Group. It has also been in discussions, as ETreported earlier, to buy a stake in Sanjiv Goenka-owned Spencer’s Retail.

Amazon, which runs a large online business in India, has been looking at buying stakes in local brick-and-mortar stores.

The current market cap of FRL is Rs 26, 648.69 crore. Amazon is likely to give a significant “control” premium of around 25-30% for their right to call upon the shares, said sources in the know, adding that the granularities of the agreement are being worked on.

Suhail Nathani, managing partner of ELP, a law firm, said in the case of listed marketable securities, put/call options (in shareholders’ agreements) are governed by markets regulator the Securities and Exchange Board of India’s (Sebi’s) circular of October 2013 and the Reserve Bank of India’s foreign exchange regulations. “It is further subject to Sebi’s block deal/bulk norms and Sebi takeover regulations (based on the percentage of shares being bought). As per RBI norms, if a foreigner is buying from an Indian person, then the price at which the shares will be sold by the Indian person would need to be at or higher than the fair market value prevalent at the time of the sale as per Sebi pricing norms,” he said.

Legal sources add that control premium is a commercial issue between two parties that has to be mutually agreed upon. The previous UPA government had allowed foreign retailers to hold up to 51% stake in local stores, subject to approval of state governments. But when the BJP came to power, it ordered a freeze on fresh FDI in the retail sector. The only exception to this rule relates to FPIs. A single FPI can hold up to 10% in multi-brand retail companies, and so far Amazon has made all its investments in brick and mortal retail through a registered FPI owned by it.

BIGGER ALLIANCE
Future Group and Amazon are also inking agreements across fashion and FMCG verticals to leverage on the network effect. Plans are also afoot to even streamline the payment options of both — Amazon Pay and Future Pay — to create a bigger eco-system.

A digital player like Amazon will have exclusive access to these brands and make these the prime proposition for food and grocery deliveries across their network. Similarly, it can create exclusive digital storefronts on their site for Future’s fashion brands and even combine its e-wallet and other financial services offerings.

Future Group has over 80 consumer product brands in FMCG, food, fashion and footwear. Almost 50% of its total sales through its retail networks now come from its own brands.

The retail network has over 2,000 stores in 355 cities and towns in every state in India (except Arunachal Pradesh). FRL owns the hypermarkets and convenience store chains. Each of the stores can act as primary distribution points for a digital player, allowing it to extend food and grocery deliveries in around 355 cities and towns across India with a 2/3 hour time frame.