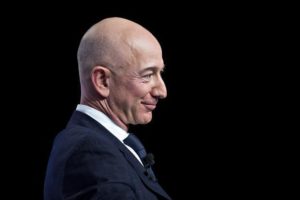 Jeff Bezos is still the world’s richest person, but he’s a lot closer to No 2 Bill Gates than just a few months ago.

The Amazon.com Inc. founder lost $19.2 billion over the past two trading days—the most ever in that time, according to the Bloomberg Billionaires Index—amid a global market selloff fuelled by fears of further trade tensions. Facebook Inc.’s Mark Zuckerberg held the previous record, set in July, when the social-media giant reported revenue and user growth that missed estimates, lopping $16.5 billion from his fortune.

Technology stocks led Monday’s declines, with the Nasdaq Composite Index sliding to its lowest since April. Shares of Amazon tumbled 6.3%, on top of Friday’s 7.8% drop, leaving Bezos with $128.1 billion, down from a peak of $167.7 billion early last month.

The $8.2 billion hit he took Monday was the biggest by far on the Bloomberg ranking of the world’s 500 richest people. Mexican telecom tycoon Carlos Slim’s $2.5 billion drop was the day’s second-largest. Gates, the Microsoft Corp. co-founder, lost $558.3 million and is now worth $92.8 billion.