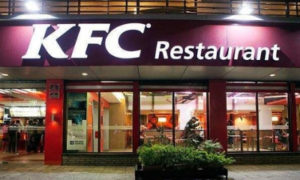 Industry officials said the decision is in line with its global strategy of reducing ownership of restaurants and being a brand custodian as it looks to push growth in the Indian market with a billion-plus potential consumers. Devyani has acquired KFC restaurants in Kerala and Goa.

“We continue to have a play in the market through a mix of both equityowned and franchise-owned stores,” KFC managing director Samir Menon said, confirming the development.

Menon said the refranchising of restaurants in Kerala and Goa to Devyani was part of the company’s strategy to unlock growth for the brand. Devyani already had a presence in the two states and the decision to consolidate was a logical commercial step, he said. Devyani operates both KFC and Pizza Hut for Yum! in India.

“We share a common vision for longterm and sustainable growth for KFC in the country,” Menon said. 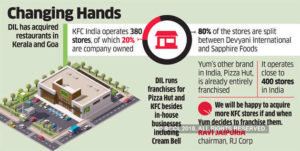 Neither Jaipuria nor Menon commented on the value of the deal.

KFC India operates 380 stores, of which 20% are company owned. The rest are split between Devyani and Sapphire Foods, which was formed by a consortium of funds led by Samara Capital in 2016. Sapphire Foods acquired part of Yum! Brands’ franchise business for Rs 750 crore in 2016.

Yum!’s other brand in India, Pizza Hut, is already entirely franchised and operates almost 400 stores in the country.

Yum! Brands president David Gibbs told investors after the company’s earnings for the quarter ended September: “We continue to make progress toward becoming more franchised, selling 134 restaurants this quarter. We are nearly 98% franchised and are on track to have less than 1,000 equity units by the end of the year.”

Yum! Brands had told investors late last year that “franchising reinforces the distinctiveness of its brands as it selects the highest potential franchisees which will be critical as we evolve into a highly franchised company.”

Devyani, the food and beverage retailing arm of RJ Corp, runs franchises for Pizza Hut and KFC and UK chain Costa Coffee, which was bought by Coca-Cola in August, besides in-house businesses including dairy brand Cream Bell. RJ Corp’s Varun Beverages is PepsiCo’s biggest bottling partner in South Asia and among the world’s biggest.