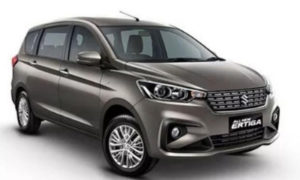 The seven-seater MPV will be launched in an all-new avatar on November 21, 2018, Maruti Suzuki India (MSI) said in a statement.

The new vehicle can be booked with an initial payment of Rs 11,000 at any of the company’s Arena showrooms across India, it said.

The next-gen Ertiga is conceptualised on fifth generation HEARTECT platform to ensure enhanced safety and noise, vibration and harshness (NVH) performance by making it stronger and more rigid, MSI added.

The new Ertiga will be available in both petrol (1.5 litre) and diesel (1.3 litre) engine options.

The Ertiga was first launched in India in April 2012 and the company has sold over 4.18 lakh units cumulatively since its launch.