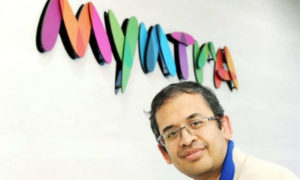 MUMBAI: Flipkart is expected to announce the departure of Myntra CEO Ananth Narayanan, from the fashion etailer on Monday, sources close to the development said. Narayanan is in discussions with Star TV-owned video streaming app, Hotstar to take up the CEO role, these people in the know told ET. Hotstar’s earlier chief executive, Ajit Mohan was recently appointed as Facebook India’s managing director.

A long-time McKinsey consultant, Narayanan may consider moving back to the consultancy firm, to join its US practise, two sources privy to the development told ET.

Along with Narayanan’s stepping down, Flipkart is expected to announce the appointment of Amar Nagaram who moved from Flipkart to Myntra, in a newly-created role of chief technology and product officer (CTPO), as reported first by ET in its December 7 edition. He will report to Kalyan Krishnamurthy, Flipkart’s CEO.

“Post the restructuring of the fashion business at the Flipkart group, Myntra and Jabong merged and Walmart did not see a clear role for Narayanan. Also, Narayanan himself was not very certain about the road ahead in this new set-up, as Krishnamurthy was going to take direct control of the two entities as the Flipkart CEO,” a person close to the development said. Narayanan and Flipkart did not respond to ET’s query.

Narayanan, who joined Myntra in 2015 as its CEO, had spent 15 years at McKinsey across various geographies. After the Jabong acquisition, he’d been heading the combined entity.

Another person close to the company said Narayanan had been negotiating for an accelerated vesting of all of his stocks but that may not have come through. He was entitled to $20-25 million in stock options, but Walmart isn’t in agreement of an all cash exit out for his Esops, as ET reported earlier.

Krishnamurthy has shuffled the technology teams at Flipkart and Myntra as the Walmart-owned online retailer looks to restructure its fashion business.

Besides Nagaram, head of consumer shopping experience at Flipkart, who has now been moved to Myntra as its CTPO, Myntra’s chief technology officer (CTO) Jeyandran Venugopal has been shifted to Flipkart to head its engineering division.

Earlier, Flipkart’s mobile category head Ayyappan R was appointed to lead category management at Myntra. Both Nagaram and Ayyappan are considered to be close aides of Krishnamurthy.