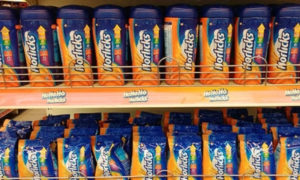 MUMBAI: Global foods multinational Nestlé is close to acquiring the consumer healthcare business of GSK, the main highlight of which is popular malt food drink brand Horlicks, sources familiar with the matter said.

Nestlé global is likely to ink the deal and wouldn’t merge GSK Consumer with its own listed local subsidiary immediately. An announcement on the deal is expected to be made soon. The Swiss behemoth is said to have pipped Unilever, the only two serious bidders in the fray.

Nestlé and Unilever — the former in particular — were seen as the most serious contenders right from the start of the auction process. Incidentally, one of the sources said the GSK management view had favoured the Unilever bid from the perspective of synergies. 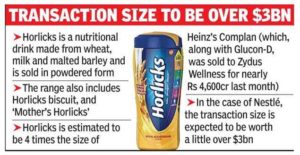 When contacted, Nestlé India said, “We do not wish to comment on speculation.” Meanwhile, a GSK Consumer Healthcare spokesperson stated, “We are conducting a strategic review and expect to conclude that by year-end.” At a recent global conference, when asked about the proposed bid for Horlicks, Nestlé’s CEO Ulf Mark Schneider had said that, while his company pursues prudent acquisitions, it is equally keen on pursuing organic growth.

Kraft Heinz, sold its Complan and Glucon-D to Zydus Wellness for $628 million last month. Horlicks is four times the size of Heinz’s Complan. For Nestlé, which is a niche player in the Rs 6,000-crore health food drinks market with brand Milo, the Horlicks deal would result in a clear leadership position, aiding the company in its global efforts to drive health and nutrition in its product portfolio. Horlicks has a value market share of around 44% and is a leader in the milk food drinks market. The deal includes accomplice brand Boost as well.

The strategic sale announced early this year had generated quite an interest among a range of consumer products companies including Coca-Cola, ITC, PepsiCo and Reckitt Benckiser, and private equity fund KKR. GSK has maintained that India remains a priority market and that the consumer healthcare business will continue to invest in growth opportunities for its OTC and oral health brands, such as Sensodyne and Eno.