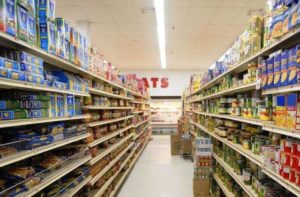 MUMBAI: One in every five products sold at the country’s biggest hypermarket chain Big Bazaar is owned by Future Consumer, a sister concern of the retailer, said founder Kishore Biyani. This indicates increasing threat to national consumer goods companies that are pushing their sales through modern trade.

As a retailer, Big Bazaar stores account for about 20% of India’s modern trade sales for FMCG. And Future Consumer tops this segment, accounting for 20.3% of packaged FMCG products that Big Bazaar stores sold in the quarter ended June 2018, company officials said. It was followed by P&G with 14% share and Hindustan Unilever with 12.5% share, industry officials said, quoting data from market tracker Nielsen.

Many Future Consumer (FCL) products started as own brands or private labels before Future Group founder Kishore Biyani restructured the portfolio into a separate FMCG company. 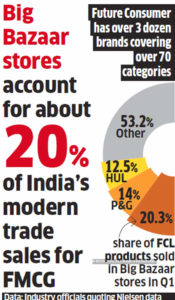 “While we have challenged companies, especially MNCs, customer decides to buy products or brands at our stores eventually,” Biyani said. “There was a void in several categories since FMCG companies were not strong or didn’t invest in building them. FCL brands have filled that gap, and our aim is to have 70% share at our stores by 2022,” he told ET.

Future Consumer has more than three dozen brands covering over 70 categories, including food brands such as Sunkist, Karmiq, Golden Harvest, Fresh & Pure, Premium Harvest and Tasty Treat. In terms of overall sales, including segments such as general merchandise and home furnishings, FCL brands account for nearly 10% of Big Bazaar sales in the June quarter, up 46% over a year ago.

The company’s contribution is as high as 50% in staples such as rice, atta and oil, according to Nielsen’s data. Future Group has gradually moved its in-house brands to other retail network, including kirana stores and rival modern trade outlets. Future Consumer, a listed company that counts Arisaig Partners and Verlinvest among its investors, has partnered Indo-Nissin to sell products at kirana stores. It has tied up with retail chains such as Tata Star Bazaar, Metro and Spar, besides 5,000 Rajasthan fair price shops.

It has also built a rural wholesale club model through Aadhaar in other states in western India. “We see ourselves as a consumer goods company which also has a retail, manufacturing and distribution network,” Biyani said.