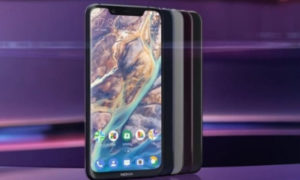 HMD Global-owned Nokia launched the X7 in China last month. With prices starting at 1,699 Yuan (about Rs 18,000) for the base 4GB/64GB variant, the phone sports a 6.18-inch display and a unique Snapdragon 710 processor. As expected, the Nokia X7 will make its way to India by the last week of November and will be named the Nokia 8.1 instead of Nokia 7.1 Plus.

The back of the phone features a 12MP+13MP AI enabled dual camera with Optical Image Stabilisation. The lens of the rear camera is made by ZEISS. The front camera is an AI-enabled 20MP clicker.

The phone runs on Android One based on Android Oreo 8 which means it’s on the priority list for latest security and firmware upgrades from Google.

The phone is backed by a 3,500mAh battery and supports 18W fast-charging.

Nokia has previously released the Nokia 3.1 Plus, 5.1 Plus, 6.1 Plus and Nokia 7 Plus in India. The Finnish smartphone maker has been trying to place a phone in every single smartphone budget segment.