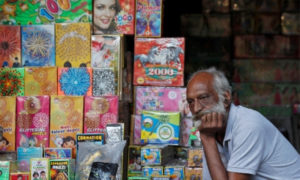 Just last week, there was frenzied activity in the market ahead of the Supreme Court’s order. But the order banning traditional crackers across NCR has brought business to a sudden stop for shopkeepers here without giving them time to dispose of their stocks.

“With Diwali just a week away, crackers for this season have already been manufactured and stocked up. Air pollution is a grave issue affecting the city, but why are the authorities waking up now?” asks a seller.

With stocks dud, there are fireworks in the markets as traders fear big bang losses

On Wednesday, the court ordered a ban on the use of existing stocks of firecrackers in Delhi and neighbouring areas, putting the livelihood of firecracker sellers at stake.

Baldev Singh, a firecracker trader sitting on the steps of his shuttered shop laments the fate of his business.

“After the first SC order, there was some hope that we will be able to sell off last year’s leftover stock. People were thronging here last week to buy crackers in bulk. I had even purchased more stock in anticipation. But this has now turned into a major loss. My business is doomed,” he moans.

Most sellers in the market echo his sentiments and ask why they were kept in uncertainty till so close to Diwali. “Last year, we suffered huge losses because of the ban. This time, the government revoked the old ban only to bring it again. They’re playing with our livelihood,” a seller said.

Meanwhile in Gurgaon, police sealed all firecracker godowns in Gadoli, Kadipur and other areas of the city in compliance with the Supreme Court order banning manufacture and sale of hazardous crackers in Delhi and NCR. All SHOs have been directed to enforce the ban.

On October 9 last year, the court had temporarily banned the sale of firecrackers ahead of the festival and refused to relax its order while dismissing a plea by traders who had sought permission to sell crackers for at least a day or two before Diwali. “Every year, the ban comes just a few days before the festival. We’re left with no time to even protest against the ban or request for a revocation,” a trader at Dariba Kalan said.

Citing the livelihood of lakhs of people dependent on the firecracker business, the Confederation of All India Traders (CAIT) has appealed to the Supreme Court to reconsider its decision. “It’s a seasonal business for lakhs of sellers earning their livelihood by selling crackers during the festive season. These people are going to starve,” said CAIT secretary general Praveen Khandelwal.

“A breathing time should have been given to these traders and sellers as stocks of traditional crackers worth about an estimated Rs 500 crores are piled up in Delhi-NCR region. These stocks cannot be transferred to other states as they already have sufficient stocks.”

With the unavailability of “green” crackers in the market, the order has dampened the spirits of buyers coming from different parts of the city, who are met with disappointment at the sight of shuttered shops across the market. Devansh Singh, from west Delhi, said he was dismayed with the court order.

“There are many factors that contribute to the city’s rising pollution levels. Why are only firecrackers targeted? Crackers are an intrinsic part of Diwali celebrations, and it’s not easy to do away with them,” Singh said.

Harjinder Singh Sodhi, who had come to the market in the hope of buying crackers, said that bursting crackers was a part of festival traditions, and its use should be regulated instead of an outright ban.