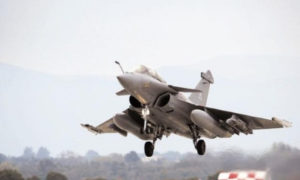 New Delhi: The Supreme Court on Wednesday asked the Centre to disclose all details strategic to the Rafale jet fighter deal within 10 days. These would include details such as pricing, decision of choosing offset partner and any other detail that could ‘legitimately be put into the public domain’.

The same would be shared between the counsel of parties, petitioners in the case within the next seven days after its submission in the apex court.

“We would like to be apprised of the details with regards to the pricing of costs and the advantage thereof, in any,” CJI Ranjan Gogoi said.

On Opposition by the Centre to disclosing price details, Gogoi said an affidavit saying so should be filed in this regard.

The apex court was hearing a batch of petitions seeking a stay on the Rafale deal worth Rs 59,000 crore, signed between India and France on 23 September 2016. The Rafale is a twin-engine medium multi-role combat aircraft (MMRCA) manufactured by Dassault Aviation.

On 10 October, the SC asked the Centre to give details of the steps involved in the decision-making process leading to the Rafale fighter jet deal between India and France. It, however, made it clear that these details would not cover the issue of pricing of the Rafale and were only to satisfy the court.

The pleas included one by former finance minister Yashwant Sinha challenging inaction by the Central Bureau of Investigation (CBI) on a complaint disclosing prima facie evidence of the commission of cognizable offences by high-ranking public servants under the Rafale deal.

Sinha’s petition sought directions to the CBI for registration of an FIR against the complaint and to investigate the issue, which resulted in corruption amounting to thousands of crores of rupees and compromised the national security of the country.

It also sought a court-monitored investigation to ensure an “independent, robust, and fair investigation, free from the influence of the powerful people involved”.

Attorney general K.K.Venugopal had earlier told the court that the deal concerned national security and that the petitions were politically inclined.

Anil Ambani-led Reliance Infrastructure Ltd has a 51:49 joint venture with Dassault — the maker of Rafale — called Dassault Reliance Aerospace Ltd (DRAL), which has an offset contract of about Rs 30,000 crore for 36 Rafale aircraft.

In April 2015, during his visit to France, Prime Minister Narendra Modi announced India’s decision to purchase 36 Rafale jets — off the shelf — in a government-to-government agreement. Under the deal, delivery of the jets are slated to begin from September 2019. This was after the government cancelled a decision taken by the previous UPA government in 2012 to buy 18 Rafale jets in a fly-away condition while manufacturing 108 in India.

On 21 September, the controversy over India’s purchase of the Rafale jets took a new turn with a French journal quoting former president Francois Hollande as saying that Dassault Aviation was given no chance but to partner Anil Ambani’s Reliance Group for the offset clause in the deal. Under India’s offset policy, foreign defence entities are mandated to spend at least 30% of the total contract value in India by procuring components or setting up research and development facilities. The offset clause for the Rafale was set at 50%.

The Opposition Congress party, which headed the previous UPA government, had alleged that the government was paying much more for the aircraft — per piece — than the price negotiated by the previous administration. The Modi government had, however, argued that it had secured a better deal.