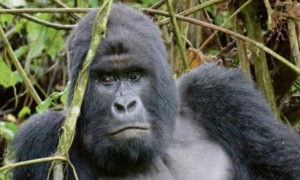 Mumbai: Most phone users in India may not see the connection, but your reluctance, or even laziness, to recycle that discarded phone could be a major reason for the dramatic decline in gorilla populations in the Democratic Republic of the Congo (DRC).

According to a new paper by University of South Australia (UniSA) researchers and Zoos Victoria, if “conflict” metals, including gold and coltan (primarily used in the production of tantalum capacitors for electronic devices), used to manufacture cell phones can be recovered from old mobile phones, there will be less incentive to mine gorilla habitats for the same minerals.

The researchers published their paper in PLOS ONE on Wednesday. UniSA conservation psychologist and great ape expert Carla Litchfield, the paper’s lead author, explains: “For every 30-40 mobile phones that are recycled, on average, one gram of gold can be recovered…Just as mobile phone sales are soaring, and gold content is increasing in some smartphones, natural sources of gold are expected to run out by 2030.”

The authors point out the barriers to recycling used phones, including lack of e-waste recycling points in many countries, secrecy around the phones’ mineral composition, privacy concerns around accessing old data, and just plain hoarding.

Estimates suggest that in Germany alone more than 8,000 tonnes of precious metals will lie in unrecycled mobile and smartphones by 2035, while by 2025 in China, an estimated nine tonnes of gold, 15 tonnes of silver and 3,100 tonnes of copper will be out of the supply loop from 0.35 billion unrecycled phones.

The Global E-Waste Monitor, 2017, published by the United Nations University estimated that India generates about 2 million metric tonnes of electronic waste, or e-waste, annually (2016). Nearly 82% of this is personal devices. The report ranked India 5th among the world’s top e-waste producing countries, after the US, China, Japan and Germany. According to a 2017 ASSOCHAM-KPMG study, Electronic Waste Management in India, computer equipment accounts for almost 70% of e-waste.

The recent population estimates of Grauer’s gorillas, according to the DRC, show a dramatic 73-93% decline, with less than 4,000 remaining in the wild. The species is now listed as critically endangered.

The researchers, meanwhile, are seeing some positive results from the first six years of the ongoing “They’re Calling On You” mobile phone recycling programme run by Zoos Victoria, which is a part of a national campaign operating across Australian zoos.

Zoo visitors and the broader Victorian community were educated about the value of recycling discarded phones to extract special metals used in their construction. Distinguished primatologist Jane Goodall launched the national mobile recycling campaign at Melbourne Zoo in 2009 to educate visitors about the link between mining in the DRC, the destruction of gorilla habitats, and the importance of mobile phone recycling.

Consequently, by 2014, zoo visitors in Victoria had donated more than 115,000 old mobile phones for recycling as a result of the social marketing initiative. “This number may seem a drop in the ocean, representing just 0.01% of the one billion retired phones out there, but when you look at the result in the context of a state of six million people, it is very impressive,” says Litchfield.

The ‘conflict’ metals (also referred to as 3TG–tungsten, tantalum, tin and gold), which are mined in the eastern Democratic Republic of Congo (DRC), not only destroy gorilla habitats, but also fund wars and human rights abuses, according to activist groups. Activists and affected communities in Congo have repeatedly called for attention to the links between their country’s minerals and its protracted armed conflicts, according to US-based activist group Enough Project.

The group recommends that all companies, including publicly traded, privately held, US and foreign companies, using 3TG minerals should conduct supply chain due diligence.

The development was reported  by livemint.com