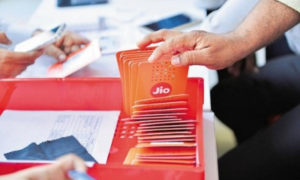 Mumbai: In June 2015, when Reliance Industries Ltd (RIL) chairman Mukesh Ambani said retail and telecom would be the sunrise sectors for the company, many investors were sceptical. Three years on, Reliance Retail and Reliance Jio Infocomm Ltd have jointly crossed revenues of RIL’s petrochemicals business, for long its second-largest revenue generator after oil refining and marketing.

Revenues in Reliance Retail and Reliance Jio grew 121% and 52%, respectively, during the quarter compared with those a year earlier, while revenue from petrochemicals grew 56%. RIL’s consolidated revenue for the quarter stood at ₹1.56 trillion, up 54.5% from ₹1.01 trillion a year ago.

“This is a marked change for a company, which was identified by its refining and petrochemicals businesses,” an analyst tracking RIL said on condition of anonymity. 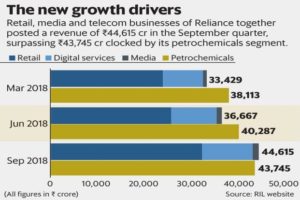 Revenues of the digital services business, or Reliance Jio, grew 52% to ₹10,942 crore. The telecom company added 37 million subscribers during the quarter, compared with 28.7 million in the preceding three months. RIL’s media business saw its revenue grow almost fourfold to ₹1,237 crore from what it was a year ago.

Speaking at an awards ceremony in London in March, Ambani had credited his son Akash and daughter Isha, for inspiring him to enter the telecom segment in 2011.

“Isha and Akash belong to India’s young generation that is far more creative, far more ambitious and far more impatient to become the best in the world,” Ambani had said. “These young Indians convinced me that broadband internet is the defining technology of our age and India cannot be left behind.”

RIL has pumped nearly $31 billion into its digital services business, forcing smaller telecom companies to shut shop and pushing Vodafone India Ltd and Idea Cellular Ltd into a merger that has relegated Bharti Airtel Ltd to the second position. Reliance Jio is seen overtaking Vodafone Idea and Airtelto become India’s largest telecom firm by 2018-end, according to a Mint report on 22 October.

Meanwhile, Reliance Retail, which operates across various product categories and formats, saw its revenue more than double to ₹32,436 crore. Reliance Retail now has 9,146 stores across more than 5,800 towns and cities.

“If it’s not big, it’s not exciting for RIL. So, when we realized that the concept of fresh fruits and vegetables could be turned into an organized retailing segment, we began our operations with Reliance Fresh,” an RIL executive said on condition of anonymity. “And our bets turned sweeter with the consumption boom that is happening in India.”

Last year, Ambani had set Reliance Retail a target of 30% annual growth over the next 10 years.

This growth, the executive cited above added, would be led by higher contribution from sales of high-margin goods, including electronics and apparel.

Reliance Retail’s apparel operations are focused on its value department chain Reliance Trends, premium brands Project Eve, AJio and the licence of over 40 foreign luxury and super premium brands. Reliance Retail is now the largest holder of foreign brand licences for apparel in India, ahead of rivals DLF Brands and Major Brands India.

Reliance Retail plans to focus on food, clothing and electronics, as Indian consumers spend most of their income on these. The company is also the master reseller for Reliance Jio.