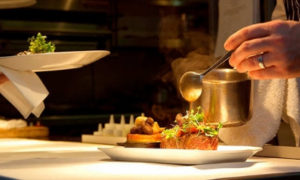 NEW DELHI: After a tough year when the rollback of input tax credit, inflation, and policy restrictions hit profitability, the restaurant sector is seeing revival in growth across formats, industry officials said.

“The rollback of input tax credit isn’t an ideal situation but it pushed us to look for increased efficiencies across the board. That consumer sentiment has revived and indians step out to eat more across formats, from quick service to fine dining to delivery, is helping,” said quick service chain KFC India’s MD Samir Menon.

Yum India-owned KFC and Pizza Hut reported 25% and 20% year-on-year growth in system sales, respectively for the July-September quarter. System sales imply growth of a franchised brand and represents total sales of all outlets that use a brand. “After battling the turbulence caused by policy changes with demonetisation, the highway liquor ban and denial of input tax credit, our industry’s perseverance is paying off and we are seeing green shoots.

The organised restaurant sector has witnessed double-digit growth in the just-concluded quarter, which is owing to consumer upsurge in eating out and ordering in,” said Rahul Singh, president of the National Restaurant Association of India which represents over five thousand restaurant brands, and founder of beer chain The Beer Cafe.

In the past two years, the eatingout sector had been grappling with consumers cutting back on discretionary spending, the ban on liquor sales along highways and the introduction of GST. Last year in November, the government scrapped input tax credit, which accompanied the cut in GST to 5% from 18% that jacked up capital expenses and rentals by 15-18%, industry officials said.

However, with consumer sentiment improving, companies said they are hopeful of sustaining the growth momentum. Anjan Chatterjee, founder and managing director of Speciality Restaurants, the company which runs Mainland China and Oh! Calcutta restaurants, said: “The profile of consumers dining out is increasing — they are getting younger and are from more diverse backgrounds. That is helping top lines; bottom lines continue to be under pressure because of GST but it’s the new benchmark we have to adapt to.”

Westlife Development, which operates McDonald’s restaurants in West and South India, reported a more than six-fold jump in year-on-year net profit to Rs 7.9 crore for the quarter ended September 30 2018, and 32% increase in revenues to Rs 350 crore from the corresponding year-ago quarter. It reported same-store sales growth of 25.7% for the quarter. “Our investments in brand extensions continue to reap results as both McCafe and McDelivery have become strategic levers for the company,” Westlife Development VC Amit Jatia had said in the company’s earnings statement late last month.

Connaught Plaza Restaurants (CPRL) MD Vikram Bakshi, who continues to operate McDonald’s in the North and East despite a prolonged boardroom battle with parent company McDonald’s India, said sales numbers have been robust in the quarter ended September 30. “It shows the consumer is looking for value and quality. We are running our stores to the best of our ability, following all regulations,” Bakshi said.

CPRL grew 25% in same-store sales in the quarter. Jubilant FoodWorks’, which has exclusive operating rights of US brands Domino’s and Dunkin’ Donuts in India, too, reported same-store growth of 20.5%, and 60% increase in net profit at Rs 77.7 crore. “Worries on cost push driven by rising fuel, impact freight, delivery costs and competition for delivery manpower from food aggregators and e-commerce companies could keep the stock trading sideways,” said Rohit Chordia, a Kotak Securities analyst.