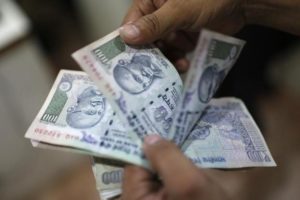 Mumbai: The worst run of rupee losses in 16 years is set to extend. Only this time, the declines might not be triggered by oil but by the surprise move by India’s central bank to hold rates despite the currency’s free fall. The rupee, which has fallen for six straight months in the longest stretch since 2002, is seen sliding to 75 per dollar by year-end, according to median of 10 analysts surveyed by Bloomberg. The December-end estimate has inched up from 69 at the start of September.

Reserve Bank of India Governor Urjit Patel’s comments Friday that the rupee’s drop is moderate in comparison to emerging market peers and that the central bank doesn’t have any target in mind unnerved investors who were expecting the authority to boost its defense of Asia’s worst-performing major currency.

“Governor Patel has effectively left the rupee out in the cold and insinuated that it is not his job to determine the appropriate level for the currency,” said Charlie Lay, an analyst at Commerzbank AG in Singapore. “RBI has seemingly opened the floodgates for further rupee weakness.” 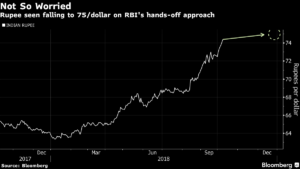 The rupee fell past the 74 to a dollar mark for the first time soon after the RBI’s decision, and analysts, whose year-end estimates have been obliterated by the meltdown, cut their targets further. Skandinaviska Enskilda Banken AB said the rupee could test 75 in the near term while ING Bank NV said the bank’s recent downgrade to 75 wasn’t enough.

To be sure, the RBI has for long maintained that it steps in only to curb undue volatility and doesn’t target any currency level. That stance places the authority behind counterparts in Indonesia and the Philippines, which have been actively supporting their currencies, Madhavi Arora, an economist at Edelweiss Securities Ltd., wrote in a note Tuesday.

“We expect the weakness to persist, with the rupee heading toward 75-plus levels against the dollar, unless some additional assertive policy steps come through,” she said.