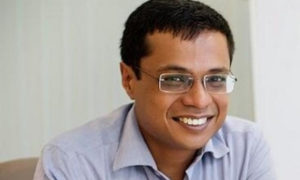 BENGALURU: Flipkart co-founder Sachin Bansal has invested Rs 150 crore in Ola. Over the past two years, Bansal and Ola co-founder Bhavish Aggarwal had become close, having led the fight against the influence of foreign capital in the domestic startup ecosystem.

Bansal, who sold his stake in Flipkart when Walmart bought the e-commerce company last year, has bought 70,588 preference shares valued at Rs 21,250 each, as per regulatory documents sourced from business intelligence platform Paper.vc. This is part of a bigger funding round for Ola that values the firm at $5.7 billion.

Bansal made about $1bn by selling stake to Walmart

As part of the same round, Ola recently raised around $74 million from Hong Kong-based hedge fund Steadview Capital.

Bansal made about $1billion by selling his stake to Walmart.

TOI recently reported he is investing in property. He bought two new bungalows in Bengaluru’s upmarket Koramangala for about Rs 45 crore. Bansal has set up a new company that will make fresh investments in startups. Even when he was in Flipkart, he was an active angel investor, with investments in startups including e-scooter maker Ather Energy.

As pioneering entrepreneurs, Bansal and Aggarwal confronted similar challenges. While Flipkart had to face the might of the world’s biggest ecommerce company, Amazon, Ola had to take on the most well-funded startup in the world, Uber. Bansal and Aggarwal had called on the government to create a level playing field for local ventures.

Ola had raised $1.1 billion towards the end of 2017 from China’s Tencent Holdings and existing investor SoftBank at a valuation of $3.5-4 billion. The on-going fund infusions are part of another round that is expected to swell to $1 billion. Ola has been raising new capital from a bunch of investors as part of an effort to reduce its dependence on SoftBank.

Ola, apart from fighting Uber in the cab-hailing space, is trying to scale up its food delivery business under Foodpanda. It has proposed to invest $200 million in this business over the year. It is also mulling investments in the epharmacy space.

Angel Tax sops may not apply to all startups: DIPP