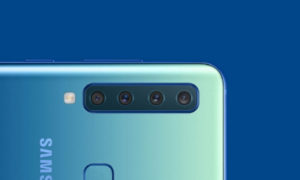 Samsung is set to launch the Galaxy A9 smartphone India today. The Galaxy A9 is the world’s first smartphone to feature a quad-camera setup. It was launched earlier at the “4x Fun” event in Kuala Lumpur, Malaysia.

Going by its international variant, the Samsung Galaxy A9 sports a 6.3-inch Full HD+ sAMOLED display with a resolution of 2220×1080. This gives it an aspect ratio of 18.5:9 and a pixel density of about 392ppi.

Powering the phone is a Qualcomm Snapdragon 660 SoC paired with 6GB or 8GB of RAM and 128GB of internal storage that is expandable up to 512GB via a MicroSD card. It is backed by a 3,800mAh Li-ion battery.

Coming to the most talked about part of the phone, the back of Galaxy A9 has four vertically-stacked cameras. The arrangement of them is similar to the on found on the Galaxy A7, which has three cameras.

The main reason to implement this setup is to offer compact camera like capabilities inside a smartphone and providing more flexibility and versatility to the user when it comes to different shooting scenarios. We explored this (sans the telephoto module) in the Samsung Galaxy A7 in Goa—you can check out its camera review here.

The phone runs Android Oreo 8.0 with Samsung’s own “Samsung Experience” UI running atop. It has dual SIM capabilities along with Bluetooth 5.0, GPS, FM Radio and USB Type-C as other connectivity options.

It has a rear-mounted fingerprint scanner, unlike the Samsung Galaxy A7 which has one built inside the lock button.