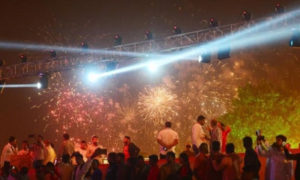 Karan Dua, an electronics shop owner in south-central Mumbai, placed his hope of crackling sales on Diwali — the Hindu festival of lights when Indians splurge on everything from clothes to cars and jewellery to houses.

It hardly lit up business for the 35-year-old shop owner. Businesses like Dua’s are seeing sluggish sales this festive season in part because India’s shadow lending industry, which accounted for nearly 4 out of every 10 consumer loans in the last three years, has grown more cautious about extending new credit amid a funding crunch of its own.

Loan volumes for some of these lenders dropped to 10% of the levels seen before defaults by a troubled financier from August onward made it costlier for all non-bank financial companies to raise funds, according to Indostar Capital Finance Pvt. which makes loans to companies, and individuals for home and vehicle purchases. The cash crunch for the industry came at the start of the peak shopping season in India, threatening consumption, which is the backbone of the economy, say economists.

“The amount the non-bank finance companies are lending has come down considerably,” said R. Sridhar, an industry veteran and chief executive officer at Indostar Capital. “Particularly lenders which give loans for buying consumer durables, vehicles and gold.”

In India, NBFCs and lenders to the housing sector have become increasingly important in supporting consumer spending as the nation’s formal banking sector is weighed down by bad loans. Nomura Inc. estimates that the loan books of NBFCs and housing lenders have grown at a compounded annual rate of 17% in the past two years, compared with 8% for banks.

Such growth looks difficult to sustain as liquidity dries up, with the Bloomberg Economics India Banking Liquidity Index showing a nearly 1 trillion rupee shortfall of cash in the banking system. That, along with a 50 basis-point interest rate increase by Reserve Bank of India this year and the recent rise in borrowing costs in the credit market, is likely to have a ripple effect.

“With banks tightening credit to NBFCs and they in turn to retailers, transporters, and builders, there will likely be lower credit growth for the rest of the financial year and beyond,” said Anjali Verma and Raag Haria, analysts at PhillipCapital India Pvt. “Urban and semi-urban demand may be dented due to limited NBFC lending.”

Madan Sabnavis, chief economist at rating company Care Ratings Ltd, has penciled in an expansion based on robust consumption. But should demand falter because of tighter liquidity conditions, then growth would take a hit, he cautions.

The worst-case scenario is a 0.1-0.2 percentage point hit to growth, according to Sabnavis, who sees expansion dipping to 7.3% from 7.5% in the financial year ending March 2019.

But some disagree with the suggestion that lending will slow down for all. Those with a strong pedigree will be able to weather this phase out, according to Tata Capital Financial Services Ltd., a non-bank lender.

“We are witnessing liquidity tightness and we believe this is a temporary phase, more like a course correction phase,” said Kusal Roy, managing director of Tata Capital. “Surely, there will be a sharper and more select focus on customer profiles.”

IndoStar’s Sridhar estimates that non-bank lenders will be back to normal next quarter, with business already beginning to recover.

Others see a problem that extends beyond the crisis at NBFCs. What the shadow lenders are going through is more a reflection of a liquidity mismatch than any incremental contagious financial stress, said Sonal Varma, chief India economist at Nomura.

“We believe that the cyclical recovery has ended and the growth slowdown is now almost a certainty,” Varma said.

A slew of high-frequency indicators tracked by Bloomberg show economic growth in the July-September quarter may have retreated from the 8% plus pace in the previous three months, as consumption cooled.

Already, car sales have fallen in the three months ended September from a year ago and latest data from the local automakers’ group show sales were flat in October. In the real estate market too, things are looking tough and loans for buying consumer goods have fallen sharply.

For the likes of Dua though, that means another difficult year. While in 2016, a surprise decision to ban high denomination notes hurt demand, the year after was lost in the mess following the chaotic roll out of the national sales tax. This festival season too seems no different.

“Diwali is an auspicious time for Indians,” Dua said. “It hasn’t been for me this time,’’ he said, referring to poor footfalls and sales that were just a quarter of what they were a year ago.