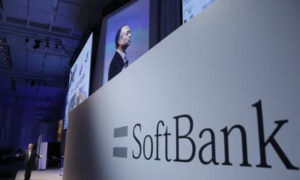 NEW DELHI | MUMBAI: SoftBank is set to invest $400 million for an over 40% stake in BrainBees Solutions, which owns and operates omni-channel baby and mother care product retailer FirstCry, according to three people aware of the development. The Tokyo-headquartered investment giant, which has been scouting for fresh investments in Asia’s third-largest economy following its $4-billion exit from Flipkart last year, has been in talks with the FirstCry leadership for a few months, sources said. 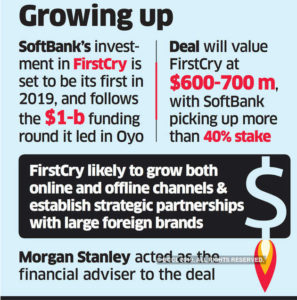 “The deal was signed earlier this week and is likely to close by the month-end,” one of the people cited above told ET. The money is expected to come in tranches, linked to financial and business performance milestones, the person added.

Morgan Stanley has acted as the financial adviser to the deal. SoftBank is likely to pick up an estimated 42% stake in the eight-year-old Punebased venture, valuing it at $600-700 million. FirstCry’s founders — Supam Maheshwari and Amitava Saha — will retain 12-14% equity, according to the people aware of the negotiations.

Capital for 3 major purposes
None of FirstCry’s existing backers, a list that includes Chiratae Ventures (formerly known as IDG Ventures India), SAIF Partners, Zurich-headquartered private equity fund Adveq and Vertex Ventures, are expected to exit their investments in the company, which was earlier valued at $350 million.

A representative for SoftBank said it did not comment on “speculation and future plans.” FirstCry chief executive Maheshwari declined to comment.

ET was the first to report on the discussions between SoftBank and FirstCry on October 23.

Founded in 2010, FirstCry has emerged as the leader in the sunrise baby and mother care sector segment, prompting multiple global investors to take a closer look at the company.

While Saha runs the company’s logistics business Xpress-Bees — which was spun off as a separate unit a few years ago and counts Alibaba as an investor— Maheshwari oversees operations of FirstCry.

FirstCry, which has raised about $125 million in equity financing till date, had also held talks with Chinese internet conglomerate Tencent and the government of Singapore-backed investment company Temasek for the round. Those negotiations did not fructify.

The capital from SoftBank, according to the people cited above, will be used for three major purposes. FirstCry is looking to grow both online and offline to take on deep pocketed rivals such as Amazon, Walmart-owned Flipkart, Reliance and the Future Group. The offline model will largely involve company owned, company operated stores with some strategic partnerships with foreign brands. The fund will also be used to scale up the recently launched parenting platform adding multimedia formats as well as for foray into private labels.

In 2016, FirstCry bought Mahindra Retail, a subsidiary of $20.7 billion software-to-automobile conglomerate Mahindra Group, and which runs offline stores under the BabyOye brand, for about Rs 362 crore, in a largely stock transaction. Earlier this year it was in talks to acquire rights to operate stores of UK-based kids products company Mothercare in India.

Parent company BrainBees Solutions Pvt Ltd, which owns and operates FirstCry, significantly reduced losses by 86% to Rs 54.55 crore in fiscal 2018 from Rs 393.24 crore in FY17. Net revenue of the company, which is the commission it earns on sale of products, increased by almost 50% to Rs 355.2 crore in the same period, according to regulatory filings, and accessed by business intelligence platform Tofler.

The upcoming public offering of China’s Babytree, an Alibababacked company in the same space, has also increased investor interest in FirstCry, according to one of the sources mentioned above. While Babytree was valued at about $2 billion when it raised capital from Alibaba in May, the IPO may value the 11-year old company at up to $5 billion.