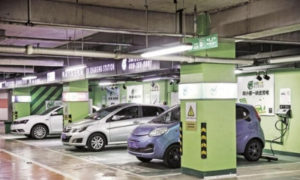 New Delhi: Automobile manufacturers have requested the government’s policy think tank to tap into the green cess and additional road taxes imposed on certain types of vehicles to incentivize the sale of electric vehicles (EVs). The plea from the Society of Indian Automobile Manufacturers (Siam) follows a report by NITI Aayog proposing the concept of feebate prevailing in several countries in Europe and Canada to cross-subsidize electric vehicles by imposing more taxes on traditional diesel- and petrol-run vehicles.

A feebate is a market-based instrument combining fees with rebates to reward energy-efficient or environmentally friendly investments or practices and penalize inefficient and environmentally harmful ones. Electric vehicles currently cost much more than those that run on petrol and diesel due to steep prices of lithium-ion batteries which power such vehicles.

The industry lobby group, in a letter to NITI Aayog, also said implementing the feebate structure and any cross subsidization will make sense only when India makes advancements in establishing the ecosystem, infrastructure and technology for EVs, and cuts taxes on vehicles.

“We first need to create a solid platform of a strong and clear long-term policy framework to promote EVs, and then implement the policy in earnest till we reach a minimum level of EV infrastructure and ecosystem support. Then we need to reduce the overall taxation on vehicles to a reasonable and uniform level,” Siam said in the letter, a copy of which was seen by Mint.

Siam also pointed out the high taxes of as much as 28% imposed on fossil-fuel run vehicles under the GST structure, with total taxes paid by customers of as high as 70%, including road taxes which vary depending on the engine fuel. In developed countries, especially in Europe, where feebate has been implemented, vehicles are placed on the lower tax slabs as rest of the manufactured goods and customer’s affordability is also much higher than India.

Hence, any change in the existing tax structure that is based on a vehicle’s size and engine will lead to a massive slowdown in sales and hit the auto industry.

“This is like comparing apples to oranges since the western countries where this kind of cross subsidization happens, there the rate of taxes on vehicles are quite low compared to India. So levying another tax doesn’t make much difference. In India, automobiles are anyways highly taxed and this is unfair on both customers and manufacturers,” said Avik Chattopadhyay, founder, Expereal, a brand consultancy firm.

According to NITI Aayog’s report, prepared by Rocky Mountain Institute, an independent non-profit organization, the cross-subsidization will be based on factors like vehicle fuel efficiency and it should be a revenue neutral approach, vehicle size neutral and technology agnostic.

Siam said, however, that fuel efficiency cannot be a barometer since it will keep increasing in the coming years with the upcoming corporate average fuel efficiency norms while the feebate system is based on taxing vehicles with higher carbon emission.

“If extra taxes are being imposed on new vehicles, then what is point of investing in making the vehicles comply with the new emission norms. The BS-VI compliant vehicles will emit substantially less carbon compared to the older ones. If electric vehicles have to be funded, then the government should find another way. Today, anyways a customer pays at least 28% GST on any vehicle and then the cess imposed according to size and the fuel,” said a senior industry executive.

Mint on 11 July reported that in an effort to incentivize electric vehicle buyers through cross subsidies, the government is considering a proposal to impose a marginally higher tax on conventional petrol and diesel cars. The finance ministry thinks the proposal should be considered to avoid the additional financial burden that the government incurs as it incentivizes buyers under the Faster Adoption and Manufacturing of Electric Vehicles (FAME) scheme.