The entry of top retail companies in India was prompted by one major fact:

Further, the organized and unorganized retail sector of India provides employment to about eight to 10 percent of the working population.

India has the world’s second richest ‘middle class’ population. The country is witnessing urbanization at an unprecedented pace, thanks to the concept of ‘Smart Cities.’

Additionally, over 300 million Indians are connected to the Internet with smart-phones. These facts make it lucrative for retail companies to operate in India.

Here we look at the major players in the retail industry in India.However, the listing does not indicate ranking or financials of any company. The list is for information and educational purposes only.

The list of 15 top retail companies we provide is based on details gathered from various sources.

1) Reliance Retail
Reliance Retail owns stores of its various brands in India. It ranks among the topmost Indian retail companies.

Reliance Fresh has over 500 stores in India selling fresh fruit and vegetables while Reliance Smart is a range of supermarkets located in various Indian cities. 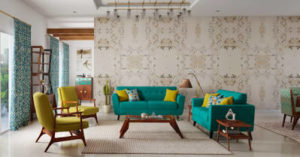 The company also owns Reliance Digital, that has some 2,000 stores selling electronics and mobile phones across India, Jio Stores has operations in 700 cities of this country, lifestyle retail chain Reliance Trends has 419 stores, a specialized brand store for women, Project Eve operates about 10 outlets, Reliance Jewels has over 60 showrooms.

Additionally, there are a few retail outlets that operate under Fastrack brand for watches, belts, sunglasses and other accessories and Sonata, for an eponymous brand of watches.

3) Raymond Group
Raymond Group is one of the oldest retail industry in India and was established in 1925.

Raymond Ltd Group is well reputed for its eponymous brand of clothing and superior quality fabrics. The parent company is the world’s largest manufacturer of integrated fabrics.

FMCG companies are business giants which influence our daily to daily activities with important product offerings.

Further, there are retail stores and retail booths of the Raymond brand in some 50 countries worldwide.

Its products are sold by more than 10,000 dealers and stores in more than 1,000 locations in India.

“Kewal Kiran Clothing Limited (KKCL) is one of India’s largest branded apparel manufacturers, engaged in the designing, manufacturing, and marketing of branded jeans and a wide range of western wear, since 1992,” states its corporate website.

Godrej India Ltd has a global presence, with its products exported around the world.

K Raheja Corp Group is also engaged in the hospitality sector and operates Renaissance chain of luxury hotels in India.

V2 Retail Ltd has 27 stores in India, including four in New Delhi- National Capital Region, 11 in Bihar, six in Uttar Pradesh, two in Odisha, and one each in Uttarakhand, Jharkhand, Karnataka,and Assam, states the company website.

Provogue Brand was launched in 1998 and since has emerged as a leading player in menswear contemporary clothing.

The company operates over 50 stores in 25 states of India under the Provogue brand. Additionally, you can buy Provogue fashion wear through some 300 outlets across the country.

14) V-Mart Retail Ltd
Since its humble beginnings in 2003, V Mart has graduated into an Indian retail major.

The company has a network of over 180 retail outlets Cantabil offers the complete range of formal-wear, party-wear, casuals and ultracasual clothing for men and women..

The company owns another brand, Kaneston, which is also popular among Indian shoppers.

In Conclusion
Though retail companies of India are operating thousands of brick-and-mortar stores, they are now stepping up online presence too.

Indications are that e-commerce retail in India will outstrip conventional shopping by consumers in the next few years.

Further, India’s e-commerce market will shoot the US$ 220 billion mark in terms of gross merchandise value (GMV), coming from some 530 million shoppers by 2025.

This will be caused by easier and cheaper availability of high-speed Internet, especially on smart-phones.

India’s direct selling industry will grow to an estimatedUS$ 2.5 billion by 2021, it is projected.

This is good news for consumers. For customers, it translates as heavy discounts as brick-and-mortar stores compete fiercely with their online competitors for a slice of the market.

Superior quality products at affordable rates will decide who wins the battle for India’s retail market.

The development was reported by thingsinindia.in