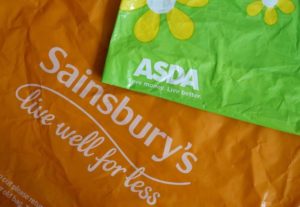 Last week the Competition and Markets Authority (CMA) referred Sainsbury’s proposed 7.3 billion pound ($9.6 billion) purchase of rival Asda, the British supermarket arm of Walmart , for an in-depth, or “phase 2”, review, saying it could result in a substantial lessening in competition in places where both chains had shops.

Both Sainsbury’s, Britain’s No. 2 supermarket chain, and Asda, the No. 3, had requested a fast-track to a phase 2 process.

On Thursday, the CMA published the full text of its initial phase 1 decision, revealing the 463 figure, and sending shares in Sainsbury’s down as much as 2 percent.

Encouraged by last year’s surprise decision by the CMA to unconditionally clear market leader Tesco’s near 4 billion pounds purchase of wholesaler Booker, Sainsbury’s and Asda have expressed confidence the regulator will not insist on mass store disposals but have not said how many would make the deal unattractive.

A source with knowledge of Sainsbury’s and Asda’s thinking has told Reuters store disposals that run “into the hundreds” would likely kill their deal.

Analysts noted that the CMA identified 369 areas of concern in its phase 1 review of the Tesco/Booker deal but did not insist on any disposals after phase 2.

The watchdog had identified 92 areas of concern in its phase 1 probe of discount retailer Poundland’s takeover of 99p Stores but again did not ask for any disposals.

“Whilst, at first glance, the number of local areas the CMA identified…seems high, the CMA’s decisional practice strongly suggests that the final number of local areas of concern in the phase 2 merger review will be significantly lower,” said Nelson Jung, a partner at law firm Clifford Chance and a former director of mergers at the CMA.

Analysts at UBS have a base case scenario of a modest 28-54 store disposals to satisfy the regulator. However, that number rises to 132-161 stores if the CMA excludes discounters such as Aldi and Lidl as competitors in its analysis.

The CMA did not include the impact of discounters Aldi and Lidl in its phase 1 competition assessments, but said this did not infer they would be excluded in the phase 2 review.

Sainsbury’s and Asda have both said that discounters, online grocery and food delivery businesses, should all be included in the CMA’s probe.

Spokeswomen for both Sainsbury’s and Asda said they welcomed the start of the phase 2 process.

The CMA’s deadline for a decision on Sainsbury’s/Asda is March 5 next year.