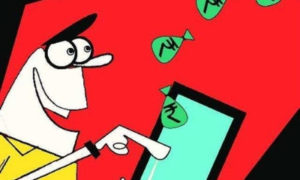 UPI crossed 482 million transactions in October, up 19% from 405 million in September, according to data from the National Payments Corporation of India. The amount settled stood at almost Rs 74,978 crore against Rs 59,835 crore in September.

The jump in transactions was driven mainly by online shopping during the Navratri and Durga Puja sales across websites such as Amazon and Flipkart, industry officials told ET. Payment companies expect a major boost to transaction numbers in November, driven by Diwali sales.

Paytm, which offers a digital wallet service and operates a payments bank, was the largest contributor to UPI payments in India, processing about 180 million transactions in October, the company said in a press note.

“It is encouraging to see the widespread adoption of Paytm, BHIM and UPI for various services such as mobile recharges, electricity, water bills, metro commutes and also at offline stores. We will continue investing our efforts towards increasing its adoption,” said Deepak Abbot, senior vice-president at Paytm.

While these are still early trends of widening UPI adoption, a senior banker said the jump in the amounts settled show that merchant transactions could be picking up steadily.

ET reported in its November 1 edition that digital payment entities reported as much as a tripling of growth in transactions during festive season sales. Amazon Pay said UPI transactions on its platform during the Great Indian Festival were 2.5 times higher than normal business day levels. “If overall transactions are compared, Amazon saw around three times jump in digital payments against that of last year,” said Vikas Bansal, head of emerging payments at Amazon Pay.

In addition, NPCI data showed that funds settled through the instant bank-to-bank fund transfer mechanism known has IMPS grew 12% to Rs 1.4 lakh crore in October from Rs 1.25 lakh crore in September. IMPS transactions increased 14% to 154.6 million from 135.7 million in the previous month.

Adoption of NETC (National Electronic Toll Collection) payments grew in October. The number of tags, known as Fastags, increased to 2.4 lakh from 2.2 lakh in the previous month and the number of transactions went up to 2.2 crore from 2 crore.